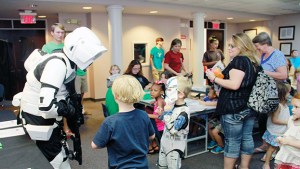 The Greenville-Butler County Public Library is inviting everyone to come out and celebrate a “galaxy far, far away” on its 7th Annual Star Wars Day ... Read more 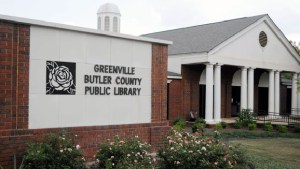 A ‘Universe of Stories’ at the Library this summer

The Greenville-Butler Co. Public Library is preparing for an eventful summer of free programming for families to take advantage of. This year, the theme is ... Read more

The final score indicates that Friday night’s game between Anniston and Greenville was a closely fought contest, with the visiting Bulldogs managing to pull out ... Read more

Kent Riley rushed for four touchdowns and Jamall Hamilton added a pair of scores as Greenville High School closed out the regular season with a ... Read more

Libraries a cornerstone of democracy

German poet Heinrich Heine was prophetic of his own people in 1820, writing, “Where they burn books, they will, in the end, also burn people.” ... Read more

Greenville’s Jamall Hamilton made the biggest catch of the night for the Tigers against visiting Charles Henderson. Then, the senior wide receiver did it again. Read more

Wetumpka running back Anthony Finney scored three touchdowns as the Indians defeated the Tigers 24-7 in the season opener for both teams on Friday night. Read more

There was good and bad. And, yes, there was ugly. Read more

A musical festival for God

Sen. Richard Shelby said today’s generation has done something those who lived through the Great Depression would have never done: mortgage their children’s futures. Shelby, ... Read more