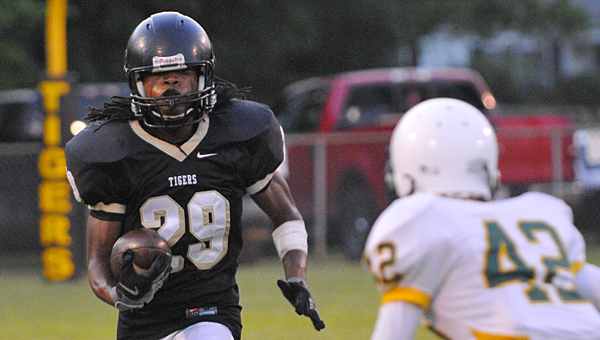 Greenville's William Dollard attempts to elude a Carver defender in first half action of the two teams' Jamboree on Friday night. Photo/Kevin Pearcey

There was good and bad. And, yes, there was ugly.

In other words, Friday night’s Jamboree game for Greenville and Carver was your typical preseason football scrimmage. There were bright sides (the Tigers’ underclassmen winning the first half 7-0), and not too bright sides, (the varsity Tigers dropping the second half 24-7).

In between there were lots of teachable moments for first-year Greenville coach Earnest Hill.

“We just wanted to play this game to see where we are,” said Hill, the former Tigers’ defensive coordinator who takes over for former coach Ben Blackmon. “They (Carver) made some plays (in the second half), but we gave them a lot also. We’ve got a ways to go.”

Carver’s Jeremy Johnson showed why he already has a scholarship offer from Auburn and is garnering interest from colleges across the southeast. And he’s only a junior. The 6-foot-6, 215-pound quarterback led the Wolverines’ spread offense on four scoring drives. Carver took a 7-0 lead early in the third quarter on a six-yard touchdown run by Justin Martin, but it was Johnson’s pinpoint accurate passing that put the Wolverines in position to score. With the score knotted at 7-7, Johnson connected on a 44-yard touchdown pass to give the Wolverines a 14-7 lead.

That score seemed to take the air out of the Tigers, both offensively and defensively. Greenville answered Carver’s first scoring drive with one of its own. Fernandez Gray turned a screen pass from quarterback Kent Riley into a 19-yard gain to the 50-yard line. Two carries by Donta Lee moved the ball to inside Carver’s 20 where Riley carried for a 19-yard touchdown run.

But then Johnson took the wind out of Greenville’s sails with his 44-yard scoring heave into the corner of the endzone.

On offense the Tigers spent most of the rest of the game trying to string together first downs. A fumble at the Tigers’ own 10-yard line led to a 27-yard field goal by Carver. Justin McClain added a two-yard touchdown run for the Wolverines with 9:27 left in the game.

Greenville was able to move the ball late in the game, driving to inside the Carver 25, but time expired.
“I saw a spark on offense there in that last six minutes,” said Hill. “On defense we were able to make some stops.”

In the first half, Greenville’s Alyric Posey had a seven-yard touchdown run following a Jeffrey Fuller fumble recovery as the Tigers’ junior varsity squad stymied Carver’s offense for a 7-0 win.

The Tigers play at Wetumpka next Friday night.