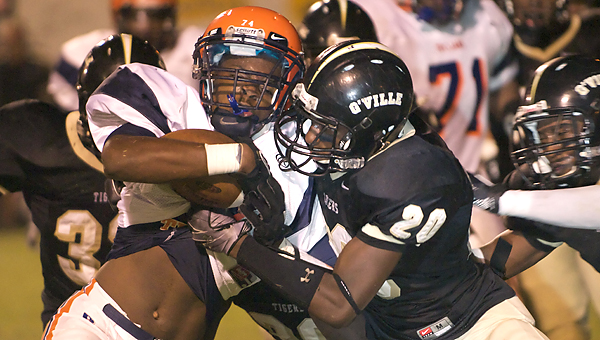 Greenville’s Jamall Hamilton made the biggest catch of the night for the Tigers against visiting Charles Henderson. Then, the senior wide receiver did it again.

Hamilton hauled in a do-or-die heave on fourth down from scrambling quarterback Kent Riley and then snagged a 10-yard touchdown off a tipped pass with thirty seconds left in the game to give Greenville a 20-17 win.

Hamilton plays a trio of positions for the Tigers: wide receiver, kick returner, and cornerback. Aside from the game winning catch, he also returned a kickoff 85 yards for a score in the fourth quarter.

Hamilton did, said head coach Earnest Hill, what coaches have been waiting to see all season.

“Tonight he was exhausted, okay?” said Hill. “But he just kept fighting and fighting and saying, ‘Coach, give me the ball.’ I’m very proud of him.”

But there were plenty of game balls to go around Friday night for the Tigers.

Starting quarterback Kent Riley sat out the first half due to disciplinary reasons and was largely ineffective against the Trojans both passing and running the football in the second half. On the Tigers’ final drive of the game from their own 26-yard line, Riley made a few plays with his legs, but a sack had the junior staring at a fourth and 15 yards to go with under a minute to play. Riley scrambled out of pressure and then let loose a pass down field where Hamilton caught it. He was tackled at the 25-yard line with 36 seconds remaining, plus the Trojans were hit with a 15-yard penalty for a horse collar tackle. That moved the ball to the 10-yard line.

Hamilton said he saw Riley scrambling and was coming back to try and help his quarterback.

“I saw the defense was coming in on him,” said Hamilton.

The very next play, Riley rolled right and lofted a pass into the endzone that looked  like it was going to be intercepted. The Trojans’ defender leapt up and the ball careened off his right arm.

Right into the hands off Hamilton, who was behind the play.

“We run tip drills on defense, but on offense it’s just second nature to catch the ball,” he said.

Freshman quarterback Jerome Watkins played inspired football in the first half in relief of Riley. He led the Tigers on a 75-yard drive in the second quarter and scored on a three-yard run with 1:46 left to tie the game at 7-7.

His offensive playbook consisted of largely three plays: run right, run left, or handoff to running back Donta Lee. Watkins’ one pass, a 16-yard completion to Hamilton, helped set up the touchdown.

“That freshman quarterback has got a lot of guts and he ran very, very hard,” said Hill.

The Tigers’ defense, which forced three turnovers in the second half: two fumbles, one recovered by Brandon Smith, the other by Jerome Cook, and one interception by Michael Smith.

But the defense’s lone breakdown of the game almost cost the Tigers. After Greenville went up 14-10 on Hamilton’s return, Trojans’ quarterback Joe Bradley connected on a 60-yard catch-and-run touchdown pass with 1:46 remaining.

The Tigers’ corner and safety both went for the ball, said Hill.

“Two tenth graders,” said Hill. “Our motto is ‘make them snap it again,’ but both of them went for the ball and missed the receiver. But it’s a learning experience.”

Greenville plays at Wilcox-Central next week.