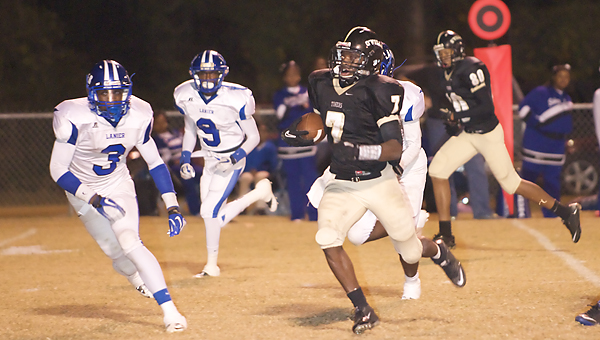 Kent Riley rushed for four touchdowns and Jamall Hamilton added a pair of scores as Greenville High School closed out the regular season with a 46-36 victory over visiting Sidney Lanier.

The Tigers improved to 10-0, but have little time to enjoy that accomplishment: the Class 5A state playoffs start next Friday. Greenville, the Class 5A Region 3 champion, hosts Tallassee (4-5), the fourth seed from Region 2.

Greenville head coach Earnest Hill is familiar with Tallassee. As defensive coordinator for Spanish Fort last season, he helped the Toros to a state title and it started with a 34-21 win over Tallassee in the first round.

“Their tradition is having a winning team and we’re going to have to fight to win that ballgame,” said Hill. “They’re a fourth seed, but that doesn’t mean anything. Every year a number one seed gets beat. I just hope it’s not Greenville High School.”

Thursday night’s regular season finale was a back-and-forth contest that Greenville didn’t close out until the fourth quarter. Sidney Lanier (2-8) led 21-19 at the half and claimed a 28-26 lead in the third, but the Tigers scored three straight touchdowns in the final period of play to win the game.

“We showed a lot of character tonight,” said Hill. “We could have laid down anytime and I’m not taking anything away from Lanier…that’s a dang good football team. We missed some tackles and we’ve got to go back and work on defense, but I was very proud of the offense. Kent Riley, I think, tonight was his best performance. Fernandez (Grey), Jamall, Donta (Lee)…all three of them ran the ball hard and our offensive line probably played their best ballgame, plus our receivers blocked their tail off.”

Greenville’s game plan was simple: spread the field, run the ball and force the Poets’ defense to play assignment football.

Riley and the three running backs ate up chunks of yardage against the Poets. Mixing in handoffs to Lee and Grey and keeping it himself, Riley was able to score three straight times from the one-yard line in the first half. The last score was set up by a 45-yard run by Grey and gave Greenville a 19-14 lead.

The Poets responded with a nine-yard touchdown pass from Patrick Perry to Terrell Flynn before halftime.

Greenville received the kickoff in the third and quickly moved down the field as Riley added a nine-yard touchdown run and the Tigers led 26-21.

Back came Sidney Lanier. Penalties moved the Poets back inside their own 10-yard line, but a third and long pass interference call on Greenville gave Perry and the offense new life at the 25. Three plays later Perry connected with Tristian Buyck on a screen pass and Buyck outran the Tigers defense for a 75-yard touchdown.

But Greenville’s offense, as they did all night, answered. Riley converted a rare third down pass to Javarris Cheatham and Hamilton scored on a 25-yard run on the first play of the fourth quarter giving Greenville a 32-28 lead.

Sidney Lanier moved the ball to the 50, but a fourth and five pass from Perry fell incomplete. Grey then scored from five yards out for Greenville and the Tigers’ stopped the Poets again on downs – this time on fourth and one – which gave Hamilton the opportunity to score on another 25-yard touchdown run.

“They fight,” said Hill of his team, which has just 12 seniors and is an unlikely unbeaten headed into the playoffs. “But they did some work in the summer and they’ve worked hard during the year.”

Kickoff for next Friday’s game against Tallassee is 7 p.m.