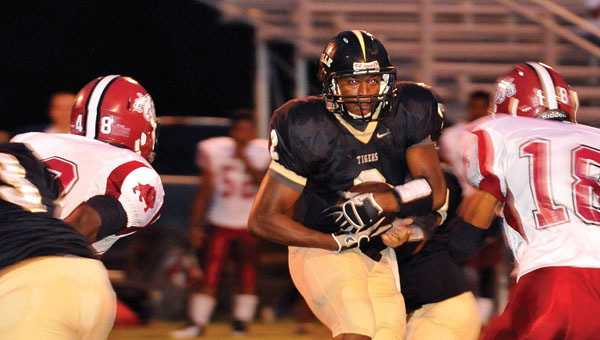 The final score indicates that Friday night’s game between Anniston and Greenville was a closely fought contest, with the visiting Bulldogs managing to pull out a tough 27-19 victory in both teams’ season opener.

The truth, however, is that Anniston came into Tiger Stadium and pummeled Greenville’s defense, building a 27-0 lead early in the fourth quarter. Anniston, which was one win away from a Class 4A state title game appearance a year ago, ran at will on the Tigers’ frontline as running backs Zondrick Foster and Rashard Williams both scored touchdowns. Williams gave the Bulldogs a 6-0 lead in the second quarter, capping off an 11-play, 80-yard drive with a 17-yard scoring run

Greenville’s offense didn’t start clicking until after Quindarious Jackson hauled in a pass from Spencer Howard for the Bulldogs’ final touchdown of the game.

The Tigers’ offense rallied to score three touchdowns in the final nine minutes as runs by quarterback Harper Vinson and tailback Jerome Watkins cut into the Anniston lead. The final touchdown by Watkins, from two yards out, came with four seconds remaining in the game.

Turnovers cost Greenville early in the contest. The Tigers strung together a series of first downs on runs by Watkins and Vinson, but an ill-advised pass by Vinson led to an interception by Anniston’s Jamar Jones who returned the ball 80 yards for a touchdown with 14 seconds left before halftime.

Greenville, which played its opener without five starters who were ruled ineligible prior to the game, will hit the road next week to face Class 5A, Region 3 rival Satsuma.