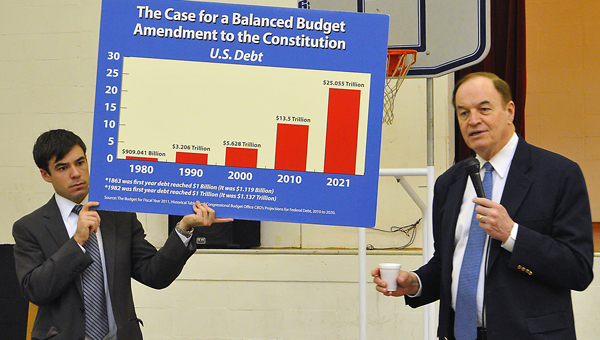 Sen. Richard Shelby, right, discusses how large the national debt has grown since 1980 with those who attended a special breakfast held for Shelby on Tuesday morning at the Greenville YMCA. (Advocate Staff, Kevin Pearcey)

Sen. Richard Shelby said today’s generation has done something those who lived through the Great Depression would have never done: mortgage their children’s futures.

Shelby, speaking to a group of Greenville citizens at a special breakfast held on Tuesday at the YMCA, said the United States is on an “unsustainable path of destruction, financially.”

“We’ve been living pretty high off credit,” said Shelby. “The bottom line is we have to reign in our spending or we’re looking at the destruction of the dollar.”

Shelby said all Americans are struggling to make ends meet with a budget and Congress, both Republicans and Democrats, should be doing the same with federal tax dollars.

“We’ve got to put the country first and not my program or someone else’s program,” he said.

Shelby praised Greenville’s past and present recruitment of industry and said city officials have made the most of the city’s location on I-65.

“If you’re not equipped to handle airplanes, the corporate jet will fly right over you,” said Shelby.

Shelby said he believed the unrest currently in the Middle East is due to people wanting a better way of life for themselves and their families. He did not know how long the U.S. would be involved in the conflict in Libya.

He also said the U.S. needs an “endgame” for all military conflicts in order to avoid long, drawn out campaigns.

Has Shelby ever considered a run for President?

“I sit by a lot of people in the Senate who ran for President,” Shelby laughed. “They’re still in the Senate.”