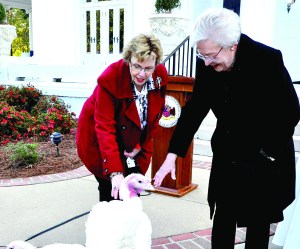 This Thanksgiving holiday is “fortunate” one in more ways than one for two turkeys and Bates Turkey Farm in Lowndes County. That’s because Governor Kay ... Read more

It’s almost time once again for the Calico Fort Arts & Crafts Fair in Fort Deposit. And this year the event will include an Alabama ... Read more

Andre Lavaughn Cameron, a registered sex offender who fled Lowndes County, is in custody according to Investigator Jeremy A. Marvin with the Lowndes County Sheriff’s ... Read more

Arts and crafts festival aiming for all ages

With an expanded antique alley, the return of funnel cakes and the addition of real “firehouse” chili, the 46th annual Calico Fort Arts and Crafts ... Read more

Lady Eagles fall to Macon East in championship round of tourney

Macon East Montgomery downed the Fort Dale Lady Eagles 15-0 in softball for those two team to win the championships and Northside blanked a valiant ... Read more

The 45th annual Calico Fort Arts and Crafts Fair will be better than ever, according to event organizers. The arts and crafts fair, which is ... Read more