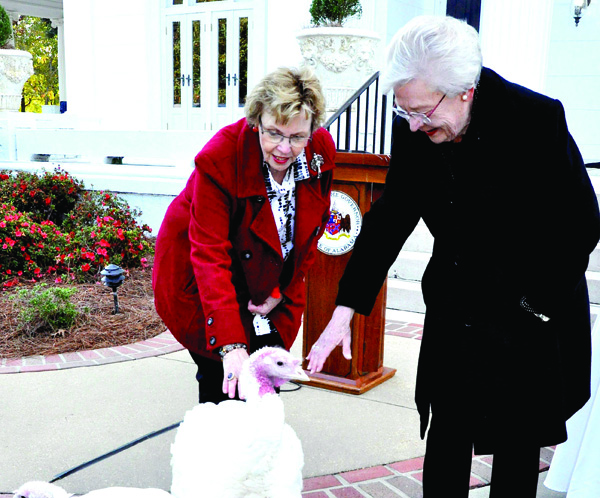 This Thanksgiving holiday is “fortunate” one in more ways than one for two turkeys and Bates Turkey Farm in Lowndes County.

That’s because Governor Kay Ivey continued a 69-year-old tradition on Thursday, Nov. 15 when she received a turkey to eat from Bates Turkey Farm in Lowndes County and pardoned both Clyde the Turkey and his special friend Henrietta from the farm in a ceremony at the Governor’s Mansion in Montgomery.

Also, Becky Bates Sloane, one of the owners of Bates Turkey Farm and Bates House of Turkey restaurant in Greenville, announced that Bates Turkey Farm was chosen to be a prize on the Wheel of Fortune this week.

She said Bates Turkey Farm products would be featured on Wheel on Monday, Nov. 19, Wednesday, Nov. 21 and Friday, Nov. 23. And, “If anybody lands on the prize and then solves the puzzle they will get $500 in turkey and $500 cash,” she said.

On hand for the turkey pardoning were Johnny Adams, chief executive officer of the Alabama Poultry & Egg Association, and John McMillan, outgoing Alabama Commissioner of Agriculture and Industries.

McMillan, who is being replaced by incoming Commissioner of Agriculture and Industries Elect from Lowndes County, former Lowndesboro Mayor Rick Pate, reminded the public that Bates turkeys would be available at the Farmers Market in Montgomery throughout the holiday season.

Sloane said her father, the late W.C. “Bill” Bates Jr., would have been grinning from ear to ear to be standing next to the first female Republican governor of Alabama elected to office.

In announcing that Bates Turkey Farm was chosen as a prize for the Wheel of Fortune program, Sloane said, “That’s really humbling that they would pick a small company like ours to be on such a national show. So, we are totally grateful for that.”

Ivey called the turkey pardoning event a “wonderful and long lasting Thanksgiving tradition” that goes back to 1949.

She asked that everyone pause to give thanks for the many blessings we all enjoy and the men and women who serve in the military to protect our freedoms.

And she said, “Clyde and Henrietta, by the power invested in me, I hereby pardon you from the succulent trappings of a Thanksgiving dinner. May you live out the rest of your lives with each other and have much peace and happiness on the Bates farm.”

She thanked Sloane and her entire family for being so devoted to turkey farming.

Sloane said Bates Turkey Farm is the only producer of turkeys in the state of Alabama. And she said Wheel was her late mother Teresa’s “most favorite show.”

She reflected that her mother and father received nine turkey eggs from her grandmother as a wedding present. And she estimated that Bates Turkey Farm now processes roughly 50,000 turkeys per year and that Bates House of Turkey in Greenville serves about 400 pounds of turkey per day.

She her father would have been happy about the farm being featured on Wheel because he “knew how to promote.”

When the cast assembles this Friday night for “You Can’t Beat the House,” the latest production from the Greenville Community... read more