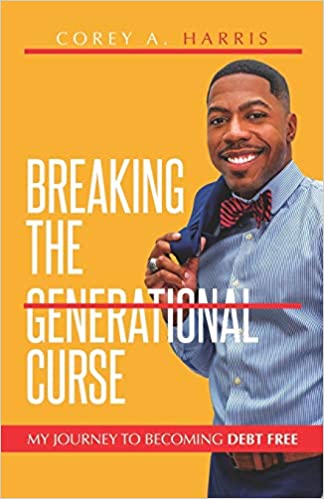 Born in Montgomery, and reared in Highland Home, Harris grew up in a single-family home. Bernadette Harris, Corey’s mother, raised him and his sister, NaTasha, alone. Corey watched his mother work hard and sacrifice for him and his sister during his childhood. However, she did not sacrifice on discipline and made sure both children were respectful and well-mannered.

Harris graduated from Highland Home School in 2008 and pursued a higher education in agriculture. While obtaining his undergraduate and graduate degrees, Harris also obtained a large amount of debt. With Pell Grants and scholarships only covering a small portion of his school costs, and Harris’s desire for instant gratification, he soon found himself in over $200,000 in debt.

“I had no money management skills or financial literacy so using my money to my advantage was not a thing,” Harris says in his book.

After working a few different jobs that had little pay and not much of a future, Harris joined the Air Force. He continued making purchases including a home on 5 acres as well as a Mercedes.

After reading and listening to a few money management books, Harris knew he had to make some drastic changes. While deployed overseas, a friend helped him start his debt-free journey.

Once Harris had climbed his way out of the deep debt hole he was in, he knew he wanted to try to help others who were in the same predicament he was in.

“The day I posted the picture of being debt free of $88 ,167 in 12 months it went viral. Everyone wanted to know how I did it. I knew then I needed to share my experience, my journey of becoming debt free and put in a book,” Harris said when asked what made him decide to write his book.

The book was finished in six days. Harris spent 12 to 15 hours each of the six days writing. Keen Vision Publishing in Huntsville, published Harris’s book, “Breaking the Generational Curse: My Journey to Becoming Debt Free.”

Now, Harris is living every little boy’s dream, flying drones while getting paid.

“I’ve been fascinated by aircraft all my life hence why I joined the Air Force back in 2015,” Harris said.

The road to becoming debt free was not always well defined and easy. Harris had many setbacks as well as several different jobs, ranging from bus driver to overseas contractor, before he finally reached his goal.

“As you pursue your journey to becoming debt-free, or whatever is in your heart to do, be careful not to underestimate the power of consistency, determination, and wise choices,” Harris said when asked what advice he would give people.

Harris has provided copies of his book to all three of Crenshaw County Schools. “It is my hope that students see that anything is possible no matter what the circumstances are,” Harris said. “I wasn’t taught financial literacy until well after college and now it’s my duty to give back to my community so that they will have the advantage before entering the real world after high school.”

“Breaking the Generational Curse: My Journey to Becoming Debt Free” is available on Amazon Kindle for $9.99.

For more information on Harris, visit his website at www.coreyaharris.net.