Sasser sworn in as District 4 Commissioner 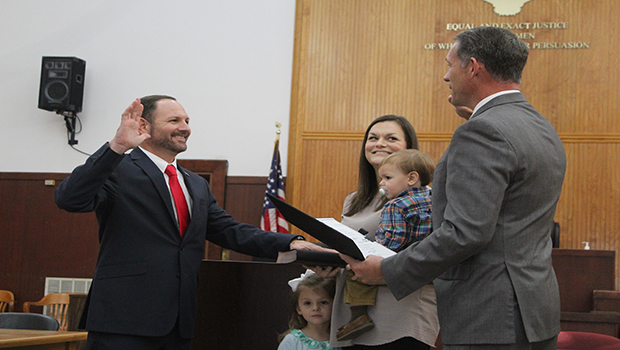 Stallion Sasser is officially the new commissioner for District 4 in Crenshaw County.

Although he was sworn in quickly the weekend before the county commission meeting on Jan. 13, a second public swearing-in was held on Friday, January 24 at the Crenshaw County Courthouse.

Friends, county and city officials and family members gathered at the courthouse last Friday to watch Sasser take his oath of office, delivered by county Probate Judge Will Tate.

“It’s an honor for Stallion to be up here not only to represent our family but to represent District 4 and Crenshaw County. I’m so proud of my brother and the leader that he is, the Godly Christian man that he is. He’s a brother, a husband, a son and a friend to everyone, and I can’t say enough good things about him.” she said.

Following the ceremony, Sasser had the opportunity to address those gathered.

After thanking his family and others, Sasser briefly discussed his goals in the new role.

“My thoughts and prayers are still with Commissioner Bailey’s family. He was doing great things for District 4 and Crenshaw County… I want to work with the commission and our representatives and put Crenshaw County on the map. I want to be a voice for District 4 and the entire county… I need your support for this, and I need your prayers. My phone is always on, and I will be your voice and listen,” Sasser said to those assembled.

A reception was held after the ceremony.