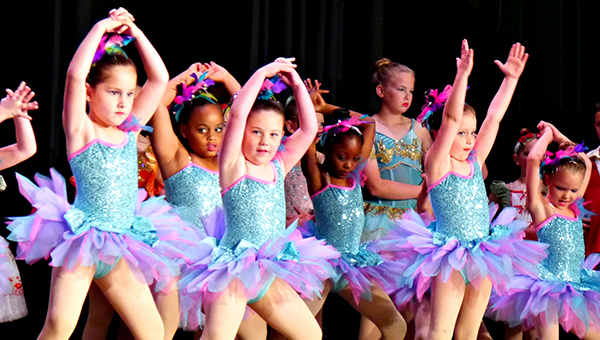 A capacity-plus crowd was captivated by the beautiful young ballerinas en pointe and costumed kids with their lively tapping toes and heels at the Ritz Theatre Saturday.  Miss Susan’s School of Dance presented their annual spring recital offering “everything from Tchaikovsky to Chuck Berry,” noted dance teacher/choreographer Susan Andrews, a fixture in the local arts community for more than 45 years.

During the first half of the program, American music from all genres served as the soundtrack for tap and jazz in “Coast to Coast.”  Intermediate and high school students performed to classic rock ‘n’ roll numbers such as Johnny Rivers’ “Memphis” and Berry’s “Sweet Little Sixteen” while the lei-clad younger set swayed to a “sunny little, funny little melody,” “Hawaiian War Chant.”

In the recital’s second act, the audience saw a beloved fairy tale unfold with an adaptation of Peter Tchaikovsky’s baroque ballet, “The Sleeping Beauty.” The second of three ballets by the famed 19th century Russian composer, “The Sleeping Beauty,” which premiered in St. Petersburg in 1890, is one of few ballets for which the music was specifically written for its story.

“Marius Petipa was the original choreographer for this ballet, and while we have obviously condensed the performance and simplified certain things, some of the very steps originated by Petipa were danced on this stage today,” said Andrews.

More than 80 of Andrews’ students performed in the production.