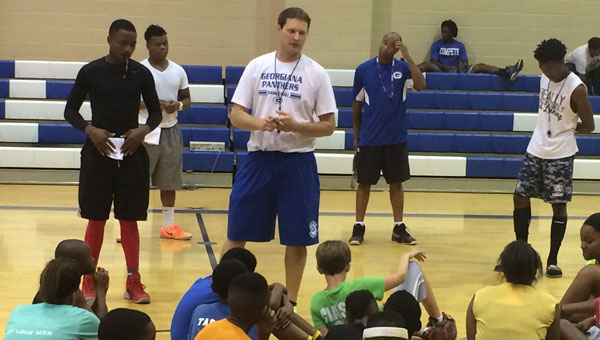 Georgiana head basketball coach Kirk Norris and his coaching staff schooled a crowd of youngsters Tuesday afternoon on the importance of fundamentals during the team’s annual summer basketball camp.

Most coaches of any sport would say that the season doesn’t start with the first game, but with summer training.

For Georgiana head basketball coach Kirk Norris, the groundwork starts being laid well before that.

Georgiana’s annual summer basketball camp is a three-day experience on the hardwood that emphasizes fun, all while learning some key fundamentals of the game along the way.

But at its core, it’s also the initial building block of Georgiana’s basketball program.

“Just about every kid that plays basketball in our program has been to this camp, dating back to 2008,” said Norris, who has run the camp for seven consecutive years.

Having multiple years of experience at the program’s helm has given Norris the unique privilege of seeing the camp’s very real impact on the school’s junior varsity and varsity programs year after year.

In essence, the camp is an opportunity to sow the seeds of the program’s future.

“It’s only three days, but I think it gives them a foundation where they learn something they can take and use, and hopefully they remember what they’re supposed to do,” Norris said.

Though fun is the primary concern, campers spend an hour or more each morning working on the fundamentals of the game—shooting, passing, dribbling and defense.

Campers rotate around four stations for upwards of 15 minutes apiece, and then apply the skills they’ve learned in competition games like hotshot, gotcha and, ultimately, a five-on-five showdown to conclude the day.

Roughly 40 kids signed up for this year’s program, and managing four rotating stations of 10 children each would prove a daunting task for any coach.

Fortunately, Norris had some help that proved more than capable.

“I’ve been lucky enough to have some former players and current players that have been helping,” Norris said.

Tuesday saw additional help from Keon Binion, a member of the 2012 varsity Georgiana Panthers team that made it to the Final Four, and newly-named assistant coach Ken Hamilton.

Though the camp is a great scouting opportunity for Norris and his coaching staff, the main goal throughout the three days is to instill a sense of self-confidence within the younger players.

“I don’t want to say a camp like this is relaxed—because we’re in there working and trying to teach—but it’s more of an environment of learning, being positive and encouraging those young boys and girls,” Norris said.

“You’ve got a few that are advanced because they’ve been playing with their older brothers and sisters, but the younger ones need some encouragement and they need to know that they’re doing things the right way.

“The biggest thing is building confidence in the young kids and let them know that they’re doing things right, and correct them if they’re doing it wrong, but in a positive way.

Despite a series of rain delays and game cancellations, the Greenville Parks and Recreation Department announced the members of the... read more