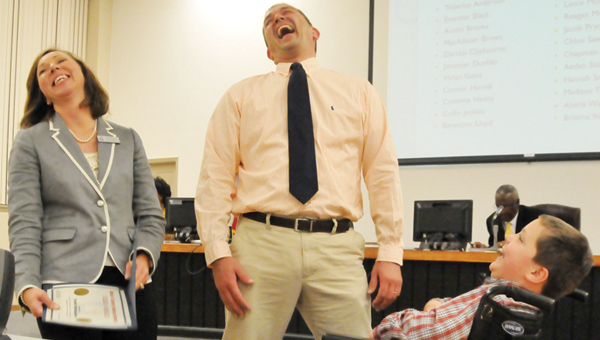 Circumstances led McNaughton to the dining room, where he instantly found himself being a big hero to GES third grader Randall Van Cor.

“I prepared my tray and the teacher in front of me was pointing at Randall, and then I saw his teacher running toward him,” McNaughton said about his good friend. “Not thinking about what was going on, I ran, too.”

Van Cor was choking on what McNaughton said was a piece of fried steak. McNaughton and teachers tried to clear Van Cor’s airway by patting him on the back. That wasn’t working.

So, McNaughton unbuckled Van Cor’s seat belt from his wheelchair and started performing the Heimlich maneuver, when the piece of meat was dislodged from the third grader’s throat.

McNaughton said he told Van Cor that the whole episode scared him to death.

“He told me thank you for saving me,” the principal said, adding that he was glad he went to lunch in the cafeteria.

For his efforts, McNaughton was given a surprise Butler County Hero Award from Van Cor at the county school system’s board of education meeting Thursday night.

“You’re the only reason why I’m wearing Bama colors,” Van Cor said with a chuckle, causing the whole boardroom to break out in laughter.

Before McNaughton received his honor, the BCSS held its swearing in and affirmation ceremony for current and new board members. The two new board members are Mike Nimmer and Brandon Sellers. Both went to school together in the county system.

The board heard its audit report for the period of Oct. 1, 2012 to Sept. 30, 2013, and in it, the state issued an unmodified opinion, meaning that the financial statements were presented fairly.

In other business, the board:

• approved the resignation of Jerry Yancy, driver education teacher at GHS; the voluntary transfer of Theresa Posey, school nurse from GHS to McKenzie School; the hire of Porsche Maneice, speech teacher at Georgiana and McKenzie Schools, effective earlier this month, and Stacy Raines as school nurse at GHS; the resignation of Menasha Tindal, and new member LaQuanda Smith with AmeriCorps;

• permitted the BOE office to advertise for bids for WAN services;

• permitted to file for E-Rate discounts;

• permitted to advertise for bids to replace the roof at GHS;

• recognized Geneva Scott for finishing her high school degree through the Virtual School program; and,

• went into executive session for exactly 1 hour, and 22 minutes to hold student disciplinary hearings. After the session, the board took action to reduce the punishment of three students from expulsion to sending them to alternative school for the remainder of the 2014-15 school year. The board decided to expel a fourth student.

Advocate staff / Jonathan bryantThe Greenville Tigers travel to play Jackson in the third round of the Class 5A state... read more