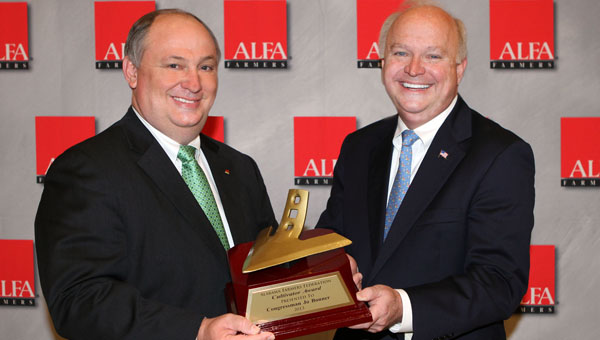 Bonner, a graduate of Fort Dale Academy, was recognized for his nearly 30 years of service to Alabama as a congressional staffer and U.S. representative. In Congress, he stood with farmers in opposing unscientific regulations, challenging burdensome estate taxes and supporting fiscally responsible farm programs.

“On the farm, we use a cultivator to get the most production from the land and to get rid of harmful weeds that choke production,” said Federation Communications Director Jeff Helms. “Alabama is blessed with elected officials, like former Congressman Bonner, who are cultivators of good government.”

A Camden native, Bonner began his career as press secretary for Congressman Sonny Callahan. He was promoted to chief of staff in 1989 and worked closely with Federation members and staff on legislation ranging from the farm bill to research funding.

Bonner succeeded his mentor when he won the 2002 election for U.S. Representative in Alabama’s 1st Congressional District and garnered at least 63 percent of the vote in each re-election bid.

He served on the House Agriculture Committee until his third term, when he stepped down to take a seat on the powerful House Appropriations Committee. Bonner stepped down from Congress Aug. 2.

“Throughout his six terms, Congressman Bonner never forgot the men and women he represented,” Helms said. “We are proud to honor him with this award.”