Panthers rally to knock off Calhoun 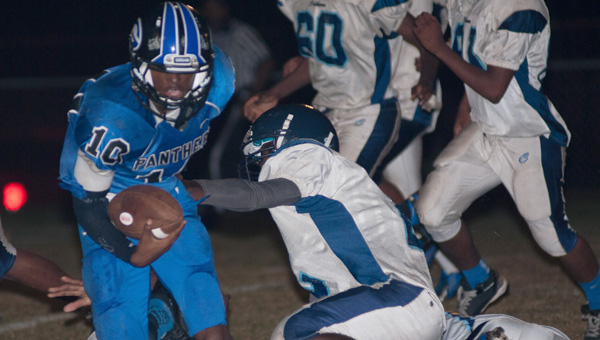 It was a tale of two halves in Georgiana Friday night as the Class 1A Panthers, who trailed 12-8 at the half and 18-8 early in the third quarter, roared back to claim their second win of the season by topping Class 2A Calhoun High School 33-18.

The Panthers’ Jacquez Payton took a kickoff all the way back at the 7:19 mark of the third quarter to make it an 18-14 game.

The Panthers next grabbed the lead on a 51-yard pass play to Latrell Seals at the 3:34 mark of the third quarter 20-18. And Payton broke the game open early in the fourth quarter on a 54-yard run. With the point after touchdown the Panthers led 26-18 with 11:42 left in the game.

Georgiana head football coach Ezell Powell said following the contest, “I was just extremely proud of the way my kids played in the second half.  They were down at the half-time but they didn’t let it get to them.”

He said the second half performance showed the maturity of his players and where he is trying to take the program.

He said he hopes the team can pick up more wins as it travels down the road.

“Jacquez (Payton) and Latrell (Seals) did some things offensively that really broke the game open for us to get the win,” Powell said.  “We have shots at winning ballgames.”

Georgiana will be back in action Friday when it travel to Pleasant Home. Kickoff is set for 7 p.m.