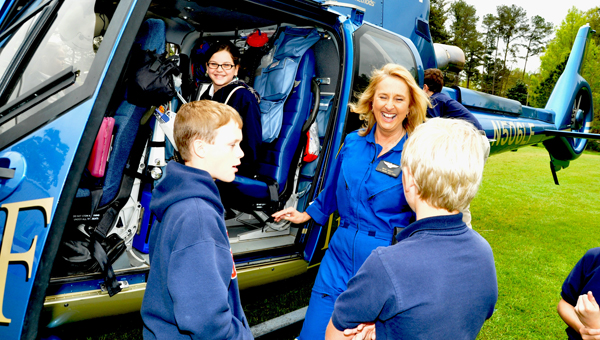 LifeFlight nurse Donna Thrower gives Fort Dale Academy fourth grade students an up close look at the LifeFlight helicopter, which is based in Greenville. The helicopter and its crew were part of the school’s career day on Friday. (Advocate Staff/Fred Guarino)

Professionals ranging from a meteorologist to an assistant district attorney discussed their jobs with students at Fort Dale Academy on Friday.

“I thought our career day was wonderful today, we had a variety of speakers,” said Carole Teague, who serves as the counselor and curriculum advisor for the school.

The school held the event to help provide its high school students with information on various careers as they prepare to choose a college and course of study.

One of the more popular presenters turned out to be the LifeFlight crew based in Greenville.

“a wonderful enhancement to our program.”

She said even elementary students, who did not take part in career day, but did have the chance to tour the helicopter, were excited.

She said she shared with the students about potential careers as a pilot, registered nurse, flight nurse and flight paramedic.

Jackie Evans, who also works as a flight nurse with LifeFlight, shared with the students the need for crewmembers to be well educated and able to deal with any situation that might arise in the field.

Students also had the opportunity to hear from LifeFlight pilot Justin Jones, who shared some of the specifics about the aircraft the crew uses, which he said is similar to the aircraft used by many tour companies.

“It’s about a $3.2 million aircraft as configured with the medical interior in it,” he said. “And it’s kind of an upgrade or new model of helicopter. It’s one of the quietest single-engine helicopters out there.”

Teague said there were several students at the school interested in the medical field, and that having presenters such as the LifeFlight crew on hand was a tremendous benefit to those students.

“I’m thankful to all the professionals for giving their time to come and be with us (at career day) and help our students and all of us in the community,” Teague said.