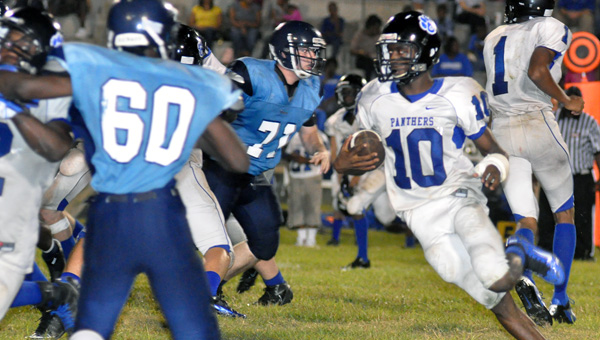 Calhoun High School celebrated homecoming in Letohatchee with a 44-22  thrashing of the Georgiana School Friday night.

“Very disappointing,” Georgiana head football coach David Watts said.”We don’t know how to tackle. We won’t put our heads in there and until we do, it’s not going to matter.”

Watts said when a team gives up close to 400 yards rushing against anybody, it’s hard to win.

Calhoun actually rushed for 332 yards, most  of which was due the running of Jamarcus Davis, who along with quarterback Jamine Jordan accounted for most of the Tigers’ scoring.

“It’s a relief,” Calhoun head coach Bill Williamson said of his team’s first win this season. “It ought to help give us a little confidence.”

Calhoun drew first blood on a 49-yard Davison run with Jordan adding the 2-point conversion at the 9:30 mark of the first quarter.

Georgiana answered with a 50-yard run by Jacquez Payton and 2-point conversion by Tanner Cartwright to make an 8-8 contest at the 1:34 mark of the first quarter.

Davison returned the favor with a 24-yard run at the 10:41 mark of the second quarter.

And Georgiana’s Javonte Williams answered with  a 14-yard pass reception. Devin Bonner connected with Payton for the 2-point conversion to make it a 16-14 contest in favor of the Panthers at the 6:42 mark of the second qarter.

Calhoun would strike back with a 14-yard pass from Jordan to Jeffery Moss to make it 22-16 at the half in favor of Calhoun.

Payton would score for the Panthers from 3 yards out to make the final 44-22.

Georgiana will be back in action Friday against Pleasant Home.