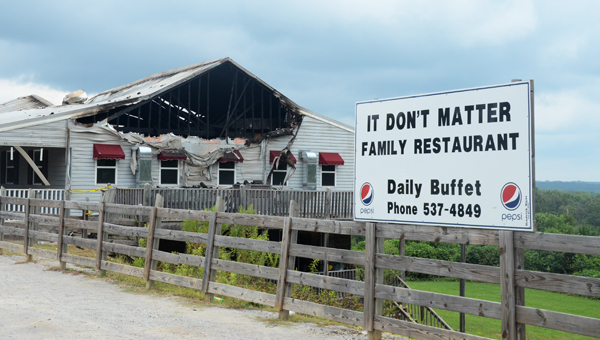 One of Highland Home’s landmark businesses, “It Don’t Matter” restaurant, burned Saturday around 10:30 p.m., and the blaze lasted until early morning.

“The call came in at 10:38 p.m., and we fought it until about 3 a.m.,” said Highland Home Volunteer Fire and Rescue chief Richard Jordan.

Pete Hayes, who owns the restaurant with his wife Liz, said that they closed at 9 p.m., but didn’t leave until after 9:30 p.m.

Hayes said he was at home when he learned of the fire.

“I got a call from an employee who said it was smoking, and by the time we rounded the corner, there was already fire going across the roof,” he said.

Hayes said all the doors were locked from the inside except for the front door, and it was broken along with front windows to allow firefighters to battle the fire.

Jordan said that the design of the building made it a difficult fire to fight.

“It’s a three-story building, and there’s one part that was inaccessible without putting someone in harm’s way,” he said.

“It was just too far gone,” said Hayes, who added that it looks like the restaurant may be a total loss. “The interior is pine treated with shellac, so it went up pretty fast.” 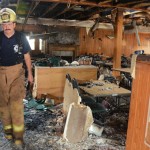 The Highland Home Volunteer Fire Department and six other volunteer fire departments from around the county responded to the fire, which they fought until early morning.

“We really appreciate the assistance from other fire departments,” said Highland Home VFR assistant chief Stephen Wilson, who said that more than 30 volunteer firefighters were on the scene.

“I want to thank all the local departments for putting their lives on the line,” Hayes said. “They all worked hard.”

The Hayes family has owned the restaurant for over seven years, and they said they’ve had an outpouring of support from friends and customers since last night’s fire.

“We appreciate all our customers that have come by and called and talked to us,” Hayes said. “We’re sorry we can’t take care of them like we want to.”

The cause of the fire has not been determined, pending an investigation by the state fire marshal. 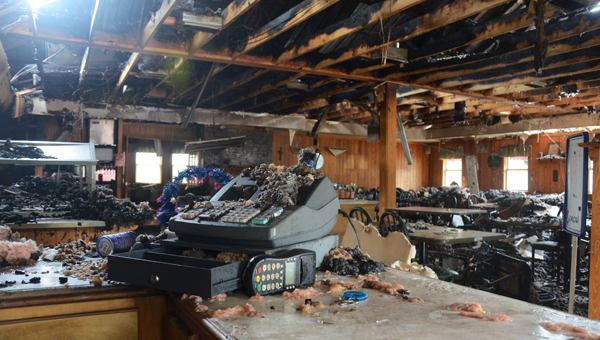 Much of the top floor of the restaurant burned or had water damage.