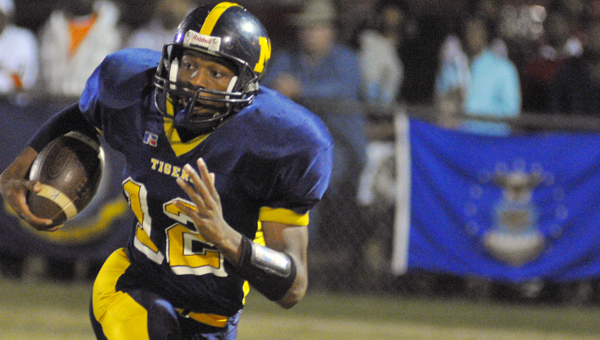 McKenzie High School will roll out the red carpet for one of its own Wednesday. The school will officially host a signing day ceremony for star athlete Emmanuel Johnson.

“We just wanted to do something special for Emmanuel,” said head football coach Miles Brown. “It’s not everyday that you have a student at McKenzie sign a Division I football scholarship.”

The ceremony will start at 9:30 a.m. at the school’s library.

Wednesday is National Signing Day for high school seniors to sign binding Letters of Intent to play college football at the school of their choice.

Johnson committed to play for Southern Miss in July. A versatile athlete, Johnson was recruited by the Golden Eagles as a defensive back. He also had offers from Duke, Tennessee, and Troy. Invited to play in the Mississippi-Alabama All-Star Game in December, Johnson caught a 36-yard touchdown pass late in the fourth quarter to set up a tying two-point conversion and eventual Alabama win in overtime.

Smith played just one year of football for Greenville, but excelled at defensive end for the Tigers. McMeans was named to the Class 5A All-State football team by the Alabama Sports Writers Association, joining Johnson, who made the 1A team.

Nationally, both Alabama and Auburn are on there way to signing impressive 2011 classes, according to Rivals.com, a website which covers high school recruiting. On Tuesday, the Crimson Tide topped Rivals class rankings with 21 total commits, while Auburn was ranked sixth with 23. (See Top 25)

Both programs are still awaiting word on several top prospects that have yet to make a decision, but will on Wednesday. Alabama is still in the running for Georgia five-star running back Isaiah Crowell (Columbus, Ga.) and five-star offensive tackle Cyrus Kouandjio (Hyattsville, MD), who is also being pursued by Auburn. Valley safety Enrique Florence will decide between Auburn and USC Wednesday, and defensive tackle Gabe Wright (Columbus, Ga.) is choosing between Tennessee and the Tigers.