Vincent led the Toros to the Class 5A State Championship in his fourth season. He compiled 39-13 record at Spanish Fort and his worst season was his first: 4-6. He followed that campaign with marks of 10-2, 12-3, and 13-2 last year.

“It’s very, very sweet,” The Press-Register reported Vincent as saying about his new job. “It’s a great opportunity, great people, a great university. I’m walking away from something special that we’ve built; when you’ve never won a game to a state championship and the relationships that you build, that’s special.”

Vincent is still remembered by Greenville Tiger fans for his lone season in 2006 in which he led GHS to a 10-3 record, including a quarterfinal appearance in the Class 5A playoffs. He was named Class 5A Coach of the Year. He left in June 2007 to take the job at Spanish Fort.

He was an offensive coordinator at both Charles Henderson High School-Troy and Spain Park before coming to Greenville.

Vincent still has ties to Butler County. His wife, Holli, is from McKenzie where his brother-in-law, Miles Brown, is head coach. 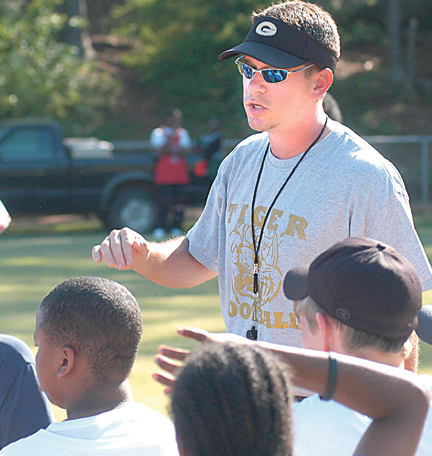 Bryant Vincent during his one year at Greenville High School in 2006. (File Photo)