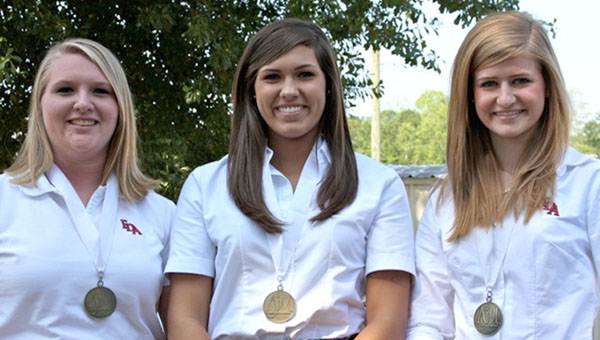 “It is very rare for a school to have three county junior misses. There have been several years we have had two representatives, but never three,” said Butler County Junior Miss Coordinator and FDA teacher Starla Jones.

The trio attended a workshop in December in advance of the contest. They arrived in Montgomery on Jan. 7 and have spent the entire week with host families there. Preliminaries were held Friday evening, continue today, with the final competition tonight. Alabama’s Junior Miss will be crowned at Frazier United Methodist Church’s Wesley Hall.

– Fail is the daughter of Roness and Karen Fail. She lists her college preferences as either Troy University or Auburn University and she would like to be a physical therapist. Her talent is a jazz dance performance to Michael Jackson’s Scream.

– Nielsen is the daughter of John and Kelly Nielsen. Her college preference is the University of Alabama and she would like to be a nurse practitioner. Her talent is Ballet en Pointe to Jai Ho, by A.R. Rahman.

– Barganier is the daughter of Sam and Pam Barganier. Her college preference is Troy. She would also like to be a nurse practitioner. Her talent is piano and she will perform Moonlight Sonata by Ludwig van Beethoven.