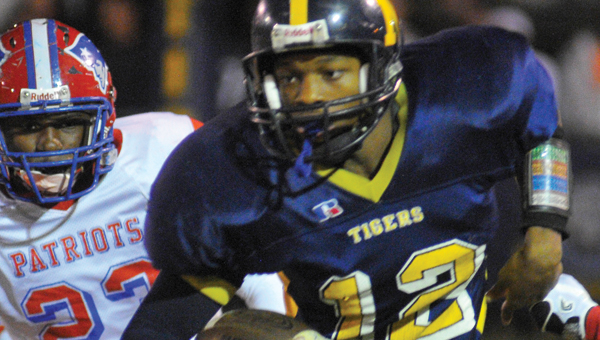 McKenzie’s Emmanuel Johnson returns a kickoff during the Tigers second round playoff loss to Linden in November.

McKenzie’s Emmanuel Johnson made his presence known during the annual Alabama-Mississippi All-Star Football Classic on Saturday.

Johnson hauled in a 36-yard touchdown pass from Athens quarterback Stephen Rivers with 1:11 left in regulation and the Alabama All-Stars down 14-12. Rivers then hit LeFlore wideout Danny Woodson for the two-point conversion to tie the game.

The game was played at Mobile’s Ladd-Peebles Stadium.

Johnson is committed to Southern Miss University. Johnson was listed as an athlete on the Alabama roster, but joined an Alabama receiving corps that included Alabama commitments Woodson and Marvin Shinn (Vigor) and Auburn commit Sammie Coates (Leroy).

Johnson projects as a defensive back in college, but did a bit of everything for Class 1A McKenzie during its region title run this season.

He was the first player from the school selected to participate in the annual All-Star game, which matches the top high school football players from both Alabama and Mississippi in their senior seasons.

Ezell Powell currently coaches at McKenzie as a defensive coordinator.