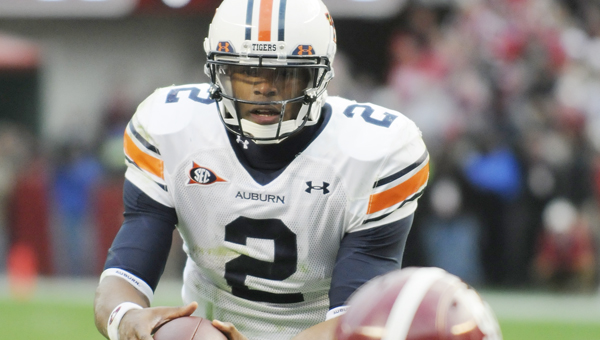 The problem with a defense focusing entirely on Newton is that Auburn has other weapons, says Fort Dale defensive coordinator Daniel Autrey. The Tigers play South Carolina for the SEC title Saturday. (Advocate Staff, Ashley Vansant)

And that’s why quarterback Cameron Newton and the Auburn Tigers are preparing for their biggest game of the season on Saturday when they face South Carolina in the SEC Championship Game in Atlanta (CBS, 3:30 CT). Win there and the Tigers – currently No. 1 in the BCS – will play for the national title in Glendale, Arizona on Jan. 10, 2011.

While Auburn has other weapons besides Newton, it’s clear the 6-foot-6, 250-pound quarterback is the primary reason the Tigers have navigated the 2010 season without a loss. If Auburn offensive coordinator Gus Malzahn could have constructed his quarterback in a laboratory, he would have built Newton. It’s a marriage made in heaven (or hell if you’re a defensive coordinator): A big, powerful dual-threat quarterback paired with an offensive mind that knows how to use him.

“His (Malzahn’s) offense has several things that creates problems,” said Greenville head coach Ben Blackmon. “They have a tempo, where they can go at a two-minute pace, and they’re able to line up quickly and attack every place on the field. They’ve got the speed to get to the perimeter. But, most importantly, they’ve got a big quarterback that can run downhill. I think he’s (Newton) definitely a man among boys and he’s grown as a quarterback through the year.”

So how does South Carolina stop Newton?

“I think they’re going to have to confuse him with multiple stunts and put eight men down on the line,” said Blackmon. “The only way I see their defense having success is slowing down the running game.”

And even that might not be enough to completely contain Newton and Auburn. Blackmon said what Newton brings to the field is an “eraser” for Malzahn.

“The game of football is like playing checkers,” he said. “Offensively, you’re trying to find a hole and they’re trying to get to you before you find that hole. I’ve was always been told that the person who had the eraser last wins. Newton’s able to see what the defense is showing and check the offense out of some bad plays. He gives them that ability.”

“I think your offense better be ready to score a lot of points,” he said, only half-jokingly. “I remember going into the Monroe game when Coach (James) Sampley said we’d have to score 35 points to win. I asked him if he could score 42. As a defensive coordinator, you don’t want to concede anything, but I think that’s what Alabama did last week. They came out wanting to shut down the inside and outside run. They said “if you’re going to beat me, you’re going to beat me passing the ball.” And what did he (Newton) do?”

Newton rallied the Tigers from 24-0 deficit with his arm, passing for 216 yards and three touchdowns for a 28-27 victory in the Iron Bowl.

“From a defensive standpoint, you have do that,” said Autrey. “You have to force them to put the ball into the air where it gives you the opportunity to make some plays. Alabama just couldn’t make the plays. He’s (Newton) just a really, really super athlete and he adds a whole new dimension to their offense. It’s unbelievable, because you know what he’s going to do and you still can’t stop it. It’s a nightmare. I just know I wouldn’t sleep a week if I had to prepare for Auburn’s offense or Oregon’s also.”

There is, however, the “rematch” factor to consider. Auburn and South Carolina are squaring off for the second time this season. The Tigers won 35-27 in Jordan-Hare in September.

Autrey and the Eagles faced Monroe Academy in the state title game after losing to the Volunteers in October, 40-14. FDA beat Monroe 49-21 in the rematch.

“I know Monroe Academy has a great staff and great players, but I think it’s always hard to prepare the second time for a team you’ve already beaten,” said Autrey. “It’s difficult to get the ‘hey, we beat them the last time’ out of your players minds. It’s always there. Will that affect Auburn? I don’t know.”

With Steve Spurrier as head coach and quarterback Stephen Garcia, wideout Alshon Jeffery, and running back Marcus Lattimore, the Gamecocks have the offensive firepower to match Auburn’s point production. The game might come down to which team’s defense is able to make stops at critical times during the game and create turnovers.

“Maybe their defense hasn’t been that consistent, but if you look at every game they’ve made plays,” he said. “The last half against Alabama they only gave up 67 yards. They’ve contributed to every win and they’ve forced turnovers. When you’re facing these high-powered offenses every week, you’ve got to have the ability to make big plays. Sure, as a defense, you don’t want to surrender lots of yards, but the bottom line is winning the game.”

And one of those Tigers’ defenders is having the time of his life. Blackmon talked with Kenneth “Big C” Carter on Monday. Carter, an All-State lineman at Greenville, is in his first season as a defensive tackle at Auburn.

“I said something about Glendale and he said ‘Coach, stop. We go to Atlanta this week,’“ said Blackmon. “Kenneth’s a freshman, so that definitely tells me he and the rest of the team are listening to the coaches over there.”