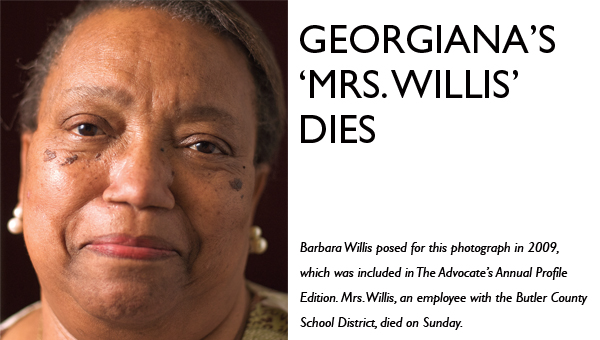 Flags were at half mast and black ribbons decorated the doors of Georgiana School on Monday in memory of longtime school employee Barbara Willis, who died on Sunday.

Mrs. Willis had been employed with the school district for 45 years, the bulk of that time spent as a secretary at the former Robert  L. Austin Elementary School in Georgiana. She had worked at Georgiana School since it opened its doors in the fall of 2009.

For many, Mrs. Willis was caretaker to several generations of school children. The first person any parent or grandparent came to know quickly at RLA was Mrs. Willis, who was hired by and worked with the school’s namesake, Robert L. Austin.

“She took care of my kids way back and they’ve been out of school a long time,” said Kay Johnson, secretary at Georgiana School, who worked alongside Mrs. Willis.

School nurse Beverly Cook attended church with Mrs. Willis, where she was honored on Sunday and presented with flowers for being a cancer survivor. Cook said Willis suffered a “spell” of some kind at church, but reportedly called several friends and relatives on Sunday afternoon to let them know she was doing well. She died soon after.