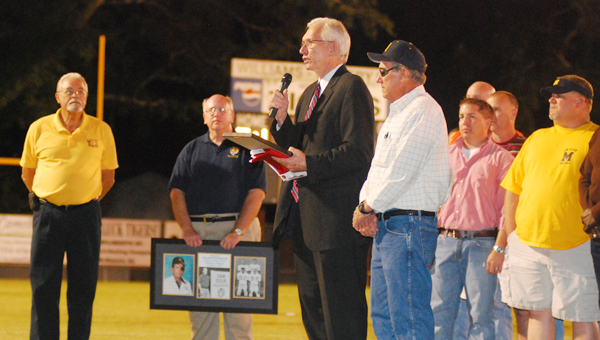 McKenzie principal Randy Williams and Quarterback Club president Greg Griffin stand in the background as Charles Newton presents the House of Representatives resolution to Coach Sam Dour. The McKenzie fieldhouse will henceforth be known as the Sam Dour Fieldhouse. To Dour's right were over 30 former players from Dour's coaching days.

Nineteen years after he led the McKenzie Tigers to become the 1A state football champions, former Coach Sam Dour returned to Williams-Vickery field to be recognized as the namesake for the newly dedicated Sam Dour Fieldhouse.

Dour spent a combined 18 seasons as coach for McKenzie. He is happy to be back, he said, as he recognized a lot of familiar faces.

“It is a special night being recognized for all the years I put in, and it is a real special night to have a bunch of my former players and coaches back with me,” Dour said.

Dour got his start in McKenzie football as a fullback and defensive back for Coach Gerald Benson. After high school, Dour got his degree at Troy University, before going to Georgiana to teach at Robert L. Austin School. He became head coach of McKenzie in 1969, but left for a brief period to teach in Albany, Ga.

A few jobs later, Dour was working at Dixie Dandy grocery store when he decided it was time to get back into football.

“I started coaching the junior high team and assisting with the high school team,” Dour said. “When Coach Mason Porterfield left, I was fortunate enough to get the head coach position, and the rest is history, so they say.”

Dour spent his longest stint coaching at McKenzie starting in 1981. His first season, the Tigers made it to the 1A championship, but lost in the Title game to Hazelwood. His second season, McKenzie lost to Brantley the first game, but went undefeated for the rest of the season. As mentioned earlier, Dour’s highest coaching accomplishment was defeating defending champions Courtland for the 1991 1A state title.

In addition to having the fieldhouse named after Dour, Rep. Charles Newton presented Dour with a resolution from the House of Representatives, which honored his achievements as coach at McKenzie.

“Over the years, I got a bucketful of memories,” Dour said. “I can remember all the different teams I coached, the things that happened at practice and all those different players’ personalities. It all adds up to a bunch of fond memories.”