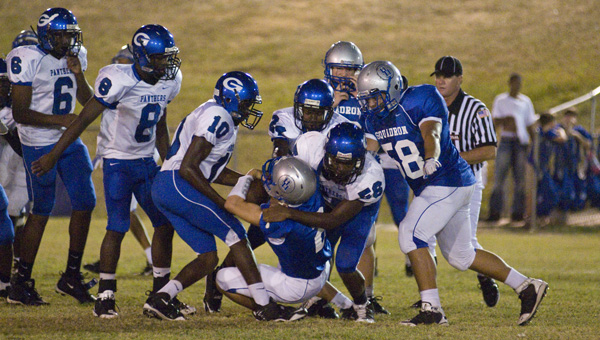 The Georgiana Panthers are still searching for the team’s first win of the season after falling to Highland Home on Friday night at Clay-Jordan Stadium, 35-22.

Georgiana received a game-effort from junior running back Keon Binion, who finished the game with 178 yards on 15 carries and one touchdown.

However, Binion’s game was overshadowed by Highland Home quarterback Kase Kelly who rushed 31 times for 170 yards, passed for two touchdowns and rushed for a pair of scores as well.

The game was shaping up well for the Panthers in the first half.

Georgiana answered a 25-yard touchdown pass from Kelly to Raheem Berry in the first quarter with a 19-yard run by quarterback Devin Bonner.
The PAT failed but the Panthers were behind just 7-6 with 10:20 in the second quarter.

The Panthers drove to the Highland Home 47-yard line, but turned the ball over on downs after a fourth and seven pass from Bonner fell incomplete. Kelly then marched the Flying Squadron down the field and connected with Arlandis Johnson for  a 10-yard touchdown with 37 seconds left.

Disaster struck for the Panthers on the kickoff. Dexter Smith coughed up the football and John Dunn found a wide open Berry behind the Georgiana defense for a 29-yard scoring strike.
Highland Home went into the locker room leading 19-6.

Kelly scored another touchdown for the Flying Squadron in the third quarter before the Panthers were able to answer.

Bonner had a two-yard touchdown run, but Kelly answered right back with another two-yard scoring plunge of his own with 7:08 remaining in the game.

Binion broke loose for a 41-yard scoring run with 6:04 left.

Things get no easier for the Panthers next week.