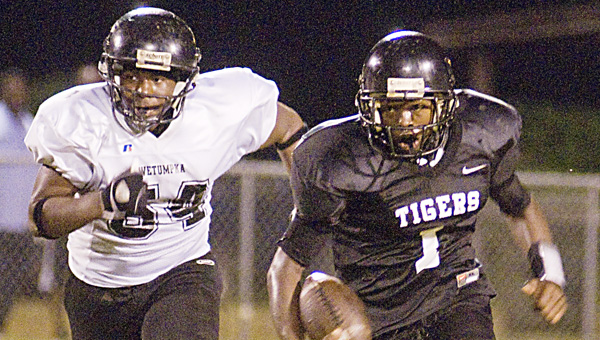 The eighth grade team won 44-30, while the seventh grade squad opened the night with a 20-6 win over the visiting Indians.

The eighth grade Indians showed a bit more firepower against GMS (3-1) than they had in an earlier 30-8 Tigers’ victory this season. But it was the Tigers’ first half offense which proved Wetumpka’s undoing.

After surrendering a 70-yard touchdown on a pass play in the first quarter, GMS punted and pinned Wetumpka at its own two-yard line. The Tigers’ defense came up big as Jeremy Lewis picked off a pass and returned it 10 yards for the tying touchdown. Quarterback Jerome Watkins’ two-point conversion gave GMS an 8-6 lead.

“That was big for us right there to be able to do that,” said head coach Josh McLendon. “After that, we never trailed.”

Offensively, though, it was hard for the Tigers to get on track in the first half, said McLendon. Penalties killed drives for the offense. The Tigers’ defense, also, aided the Wetumpka cause by committing several mental errors.

But the Tigers still had more than enough to add a pair of touchdowns before half. Relying mostly on the legs of Watkins, GMS pushed the ball down the field with Alyric Posey scoring on a five-yard run to give the Tigers a 14-6 lead.

“Jerome’s a tough player and good kid,” said McLendon. “He only came out of the game one play the entire night because he was cramping up.”

Following another interception by Quintrell Ball, Watkins launched a deep pass to Draylen McGrew to the Indians’ eight-yard line. Three plays later, Watkins scored on a one-yard run with 21 seconds remaining in the second quarter.

Greenville continued its offensive surge in the second half.

But Wetumpka woke up as well. The Indians scored to cut the lead to 22-14.

The Tigers, though, had an answer in the form of a Posey kick return for a touchdown. The Tigers’ final touchdown was on a Watkins 35-yard touchdown run and Javarious Cheatham intercepted an Indians’ pass to seal the win for Greenville.

For the seventh graders, Dequarious Peterson broke a pair of touchdown runs late in the fourth quarter in the Tigers’ 20-6 win over the Indians.

GMS is off next week, but returns to action at home on Oct. 7 against Charles Henderson Middle School.