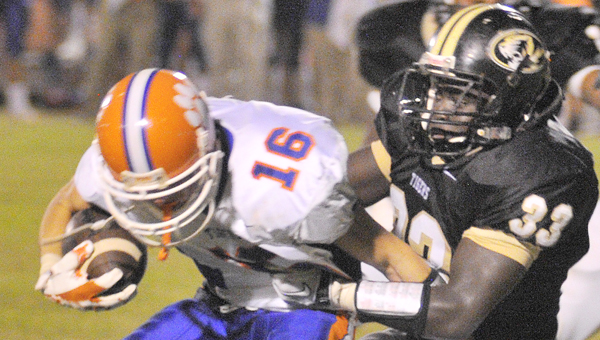 Greenville jumped out to a 16-0 lead at halftime and beat visiting Chilton County 36-0 Friday night.

Greenville put up 47 points two weeks ago against Central-Tuscaloosa and allowed the visitors to score 13 points after halftime. Against Paul Bryant High School, GHS last week fell behind 21-6 and had to fight from behind to claim a 52-41 victory.

“It’s just one of the things we wanted from the team and that was for them to put it all together,” said Blackmon. “And they did it.”

Blackmon was especially pleased with the play of the defense, which tallied its first shutout since a 55-0 win over Wilcox-Central last year. Three times Chilton County drove inside the redzone against Greenville, but was turned away on downs.

The offense, meanwhile, hit a few potholes in the first half, yet still built a two touchdown lead despite being without top wide receiver Jamall Hamilton, who sat out with bruised knee.
“He’s (Hamilton) got a little tenderness in his knee,” said Blackmon. “We dressed him out and we thought that if we got in a situation where we needed him, he’d be ready. But, fortunate for us and him, we didn’t. We’re going to need him down the road.”

Junior Deandre Savage received most of the reps at tailback in place of starter Patrick Bedgood, who’s still battling a case of turf toe.

Quarterback Kent Riley, though, was completely healthy and he showed it on the second play from scrimmage, sprinting to his left, then bouncing off several tackles before cutting to his right and outrunning the defense for a 62-yard touchdown. Nick Davis’ two-point conversion gave Greenville an 8-0 lead. A 90-yard touchdown pass from Riley to Darius Watson was called back because of a holding penalty, but Riley still scored on the drive, diving in from one-yard out 30 seconds before halftime.

Linebacker Terrance Thompson then stepped in front of pass for an interception in the third quarter, returning it 30 yards to the Greenville 17. Savage carried 15 yards then two more for the touchdown. His two-point reception from Riley extended GHS’s lead to 24-0 midway through the third.

A high, arching kickoff by Ozell Carter then ended up in the hands of Greenville’s Jonathon Robinson, setting up the Tigers’ offense on their own 38-yard line. Wide receiver Fernandez Grey took the ball on a speed sweep for a 62-yard touchdown run.

Chilton County moved the ball to the Tigers’ eight-yard line, but Zydarius Smith and Bedgood combined for a sack and Demontray Warren broke up a fourth and 16 pass play to preserve the shutout.