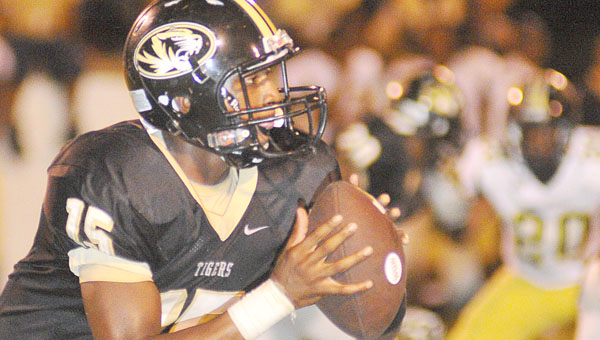 Jamall Hamilton’s 96-yard touchdown run gave Greenville the lead for good over Paul Bryant on a night when the two teams combined to score 93 points in a 52-41 Tigers’ win.

The game was highlighted by big plays from both teams. Paul Bryant was led by senior quarterback Brock Hall, who engaged in a game of “one-up” with Greenville sophomore Kent Riley. Hall rushed twice for two touchdowns and passed for a score also, but it was Riley who outdid the Stampede star, scoring four rushing touchdowns.

Hamilton, the Tigers’ blistering quick junior wide receiver, was the other star Friday night. Prior to his length-of-the-field scoring sprint in the closing seconds of the third quarter, Hamilton had also hauled in a 38-yard touchdown pass from Riley and rushed for a 21-yard score in the first half.

Starting tailback Patrick Begood played sparingly for the Tigers because of injury. The Tigers’ defense were also down a couple of linebackers and Paul Bryant quickly took advantage.

After Greenville took a 6-0 lead on a 37-yard pass from Tijuan Rudolph to Tywaun Graham, Paul Bryant responded with a 92-yard touchdown run to claim the lead in the first quarter. Cornelius Lee then went 68 yards for a touchdown and Hall then passed 35 yards for a score to take a 21-6 lead over Greenville.

Riley answered. He went 32 yards for a touchdown and Fredarius Boone’s fumble recovery on defense allowed Hamilton to run 21 yards to cut the Stampede’s lead to just 21-20.

Hall scored on a one-yard run, but Greenville’s offense scored with 16 seconds left in the second quarter on a pass from Riley to Hamilton and Paul Bryant led 28-26 at the break.

Riley gave Greenville back the lead on a one-yard run, but Hall went 40 yards around end and outraced the Tigers’ defense for a 35-32 lead.

A punt pinned GHS deep, but Hamilton broke free for his long run.

Then, the Tigers’ defense finally stiffened, forcing the Stampede in two consecutive three and outs. Touchdown runs of 28 yards and five yards by Riley put the game out of reach.