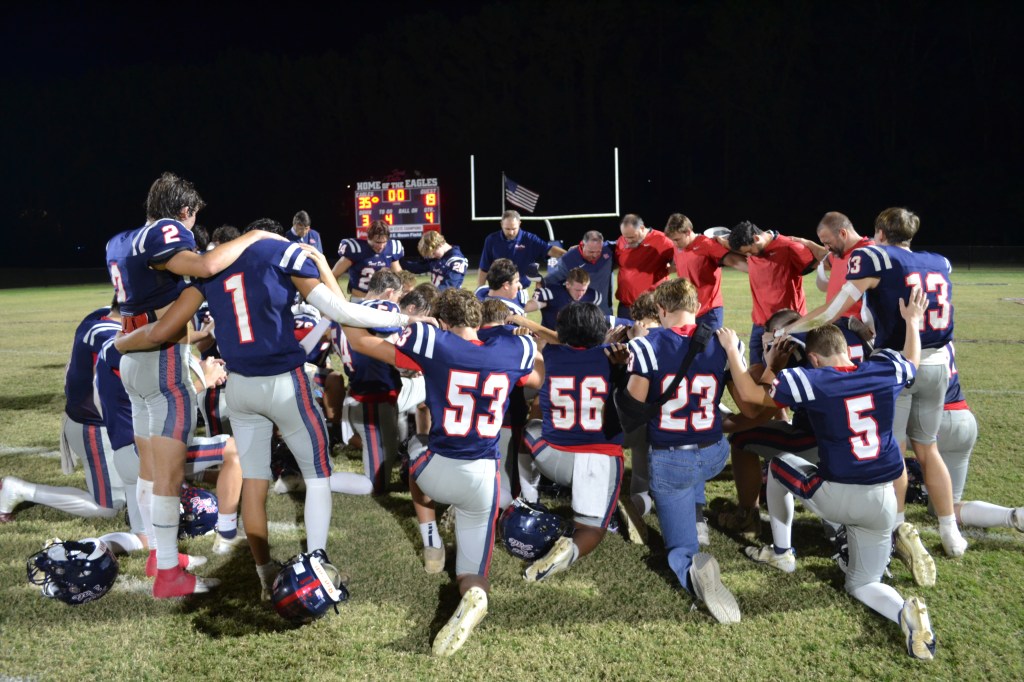 Fort Dale Academy recovered from a 19-0 deficit and scored 35 unanswered points in a 35-19 defeat of Escambia Academy on Friday night at Winfred E. Boan Field.

Trailing 19-14 with 10:39 to play, Eagles quarterback Ethan Alford connected with wide receiver Alan Alvarez on a 36-yard touchdown pass to put his team ahead for good, 21-19.

“It’s an emotional night for our guys,” said Fort Dale head coach Eric Folmar. “We talked about it before the game. A lot of times, you just don’t know when the end is … We knew, and our seniors know, this was it. There was a lot of emotion early, and I think our kids were just a little wide-eyed, feeling those emotions out and weren’t playing very well..

“Once they got settled in and played football, we were good … We imposed our will in the second half, they eventually folded, and we were able to take control of the game.”

Alford extended Fort Dale’s lead to 28-19 on a 35-yard touchdown run behind the left side of the Eagles’ offensive line with 5:35 remaining.

On the ensuing kickoff, Alvarez pooched the ball to the Escambia 29-yard line, and Garrett Simmons covered up the ball for a deep onside recovery after Escambia’s return unit seemed to forget the ball was live.

Clay Benson capped the short drive with a 1-yard touchdown run to give Fort Dale a 35-19 advantage with 3:01 left in the fourth quarter.

Alvarez caught Escambia sleeping on return duty for a third time in the contest, booting the ball to the Escambia 37-yard line, where Simmons recovered again. Alvarez recovered his own onside kick on the opening kickoff.

“That’s what was able to seal the game for us,” Folmar said. “They’ve got some really good athletes back there returning kicks, so we weren’t wanting to give those guys a chance to take it back on us. We were just trying to pooch it up and try to make them fair catch it. They just happened to check up short, and it went our way. Those were certainly a huge difference in the game for us to be able to ice it there at the end.”

The Cougars jumped to a 6-0 lead in the first quarter after a 2-yard touchdown run by Tyler McCants.

Escambia added two more touchdowns in the second quarter via an 18-yard run by Christian Crook and a 35-yard interception return by Devin Kelly to extend the advantage to 19-0 with 2:42 left until halftime.

Fort Dale senior Sterling Arnold scored the Eagles’ first touchdown on a 12-yard run with just over a minute to play in the half to make the score 19-7.

An interception by Arnold in the third quarter put the Eagles at the Escambia 25-yard line. Three plays later, Alford found Arnold on a 21-yard touchdown pass down the left sideline after Alford successfully evaded Escambia’s corner blitz. The Eagles trailed Escambia, 19-14, with 6:31 to play in the third stanza.

“That’s what he does best,” Folmar said of Alford, who rebounded after the first-half interception. “Ethan’s an athlete playing the position. He does best when he’s moving around in the pocket and making things happen outside. That’s just stuff he’s done all year. He’s more dangerous when he’s running around with his feet and able to see things a little more clearly.”

Alford finished the evening 4-of-8 for 74 yards, two touchdowns, and one interception, and added 104 yards and a touchdown on 16 carries.

Simmons led the team in rushing with 136 yards on 20 carries to go with his pair of onside kickoff recoveries.

Alvarez led the team with two catches for 49 yards and a touchdown, while also tying with senior middle linebacker Brody Stringer on defense with 5.5 tackles. Alvarez went 5-of-5 on extra-point tries, but had a rare miss of a 25-yard field goal attempt on the Eagles’ opening drive.

Stringer said it meant a lot to celebrate a victory with his teammates.

“It’s great to get the win, but I just love my team,” Stringer said. “It’s all about them. I couldn’t be doing this without them, and this comeback, it’s just great.”

Arnold, whose night ended with eight carries for 52 yards, a rushing touchdown, one catch for a 21-yard touchdown, an interception and 3.5 tackles, discussed the win and what words he had to leave behind for those who’ll carry the banner for Fort Dale in 2023.

“Fight hard, and never give up,” Arnold said. “If you think that you can’t do it, it’s a lie. If someone says you can’t do it, don’t believe them. You push harder against everybody else’s doubts as motivation, you lean on your players as if they’re family because everybody here is family, listen to your coaches, and strive every single day to be better and better than your were in the past.”

McKenzie picks up first win of season against Kinston