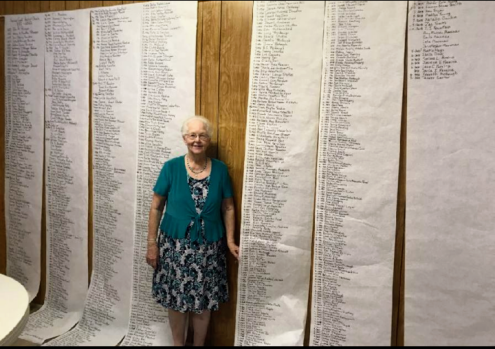 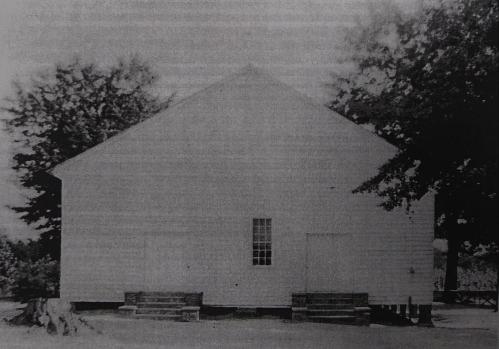 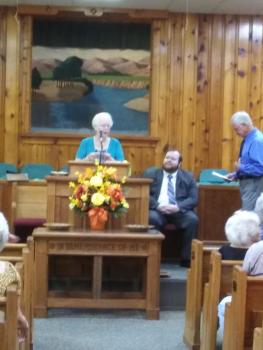 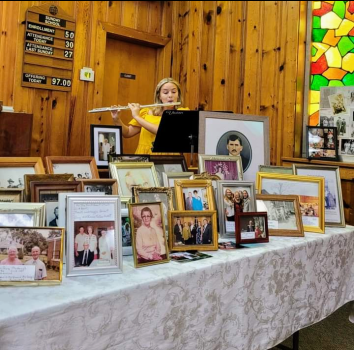 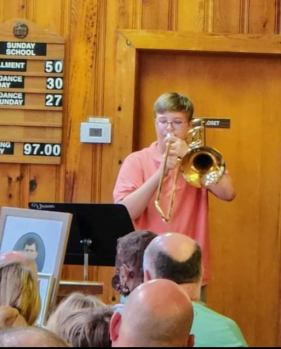 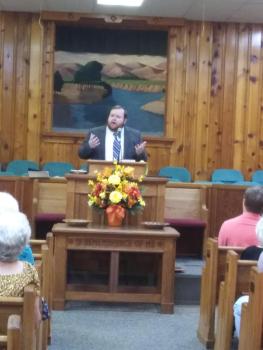 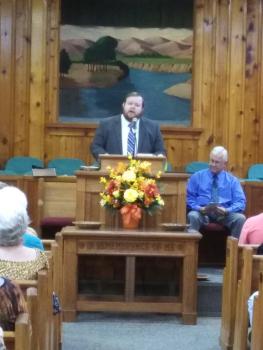 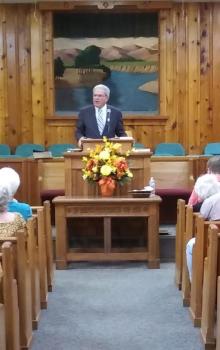 Barbara Perdue Middleton served as the lead organizer for the event. Rev. John Ross Massey, a Honoraville native and  pastor at the church for three years, presided over the event.

“She works so hard,” Massey said of Middleton’s efforts. “I’m so proud of her and the work she does for the church.”

The events began with Middleton stepping up to the pulpit.

“We’re going to open a symbolic scroll from our church, with a list of all of our church members,” Middleton said. “Our church started with 13 charter members. We have had at least 838 members since the church began.”

Middleton spoke briefly about the mission work the church has done since the 1920’s.

“This year, we have a mission trip planned for Guatemala. Our ladies have worked hard to make over 200 pillow case dresses to take for the children.”

At this point, several of the young girls put on a parade wearing the dresses intended for the mission trip recipients. It was an example of the skilled needlework from the mission ladies.

Vivian Gates, Butler county winner of the Distinguished Young Women award, played the hymn “How Great Thou Art” for the congregation on her flute.

Then, guest speaker for the special event, Rev. Morgan Bailey, ascended the pulpit. He is the pastor at Macedonia Baptist Church and serves as Vice President of the Alabama Baptist State Convention.

He and his wife, Ritta, have been on many mission trips, including several trips to the Holy Land.

“If you ever get a chance to go, you should. It is a beautiful place,” Bailey told the audience.

“They are two of my favorite people”,  Middleton said of the couple.

“Morgan and Ritta Bailey have been involved with the Alabama Baptist State Convention for some time, and have been on many mission trips with the State Board of Missions,” added Middleton.

“This church began on Sept. 30, 1882. Bobby (Middleton), was not there at the time,” Bailey said. At which point, everyone laughed.

Bailey preached for some time on the Church in Philadelphia from the Book of Revelation.

He told a story about being lost during a fishing trip. “We only had a small flashlight to get the entire party back to the safety of the camp. But if you have Jesus in your life, it’s enough light.”

“We live in a toxic age, a divided nation. The atmosphere has raised up people that are bent on dividing and destroying this nation. We can not bow down to the false gods,” he said.

Bailey went on to add, “The culture may change, but the word of God never changes.”

Kolbie Leger rounded out the service by playing “It Is Well With My Soul” on his trombone.

After the service was over, the crowd slowly made its way to the Fellowship Hall, and the many tables laden with the great feast provided by all the members of the church.

Several gathered in front of the many displayes Middleton had set up for displaying family pictures and histories.

Pamala Nolan congratulated Middleton on her hard work putting the exhibits together. “This is wonderful ,” she said.

Laurice Heartsill Goorley stopped by and told Middleton, “You did a fabulous job. It’s beyond fabulous. It’s amazing.”

Goorley told the crowd of people huddled around a group of family pictures, “I’ve got 208 note books on the history of the church and its families.”

There were hundreds of pictures on display throughout the entire church. There were documents dating back to the 1880’s and even earlier.

Meg Stringer, daughter of Margaret and the late Jerry Ferguson, talked about the volunteer missions she and her family went on as she grew up in the church.

“Daddy was a pastor at Liberty for several years. They did volunteer missions from Porto Rico to Russia.”

“We went to Ecuador in 1977. There’s several letters that he sent back to Greenville in the archives of the Greenville Advocate,” she said.

Stringer said of her mother Margaret, “She just turned 80. She sewed some of the children’s dresses for the upcoming mission trip. This is her way of ministering.” She does it through her sewing.

The original 13 charter members were represented by the families of Stringer, Daniel, Bowden, Perdue, Grayson, Thornton, McDaniel, Ramage and Arrington

The original church was organized on September 30, 1882. The church building was completed in 1883 and the official dedication was the second Sunday in July, 1883.

The land deed for the church was given by several members of the Stringer family, including; John A., John E., and Margaret (widow of James Sr.).

F.M. Andress and Joshua Barrett were hired as the contractors to oversee the project of erecting the church.

The organizing pastors present at the dedication ceremony were Matthew Bishop, T.E. Morgan and W.C. Avant.

During World War I, seven members of Spring Creek Church answered the call to serve our country. When America entered World War II, 38 brave souls joined in the fight against tyranny.

Spring Creek raised a flag at the entrance of the church, and the names of every soldier from each war were written down and pinned to that flag.

The parishioners prayed; long and hard.

Not one of those soldiers lost their lives in either war. All returned safely home.

The church underwent renovations in February of 1960. The old church was replaced by the current brick structure.

In 1976, Spring Creek became a full time church. Crenshaw county pastor Rev. Joe Leverette took on the responsibility of the congregation. The church was now able to offered both morning and evening Sunday services.

In 1979, the beautiful stained glass windows were added, with the generous help of the Moseley, Grant, Elgin and Waller families.

A cemetery preservation fund was started in 1985, to ensure the upkeep and maintenance of the cemetery grounds.

The parishioners present now are fifth and sixth generation descendants from the original folks who established the church back in 1882.