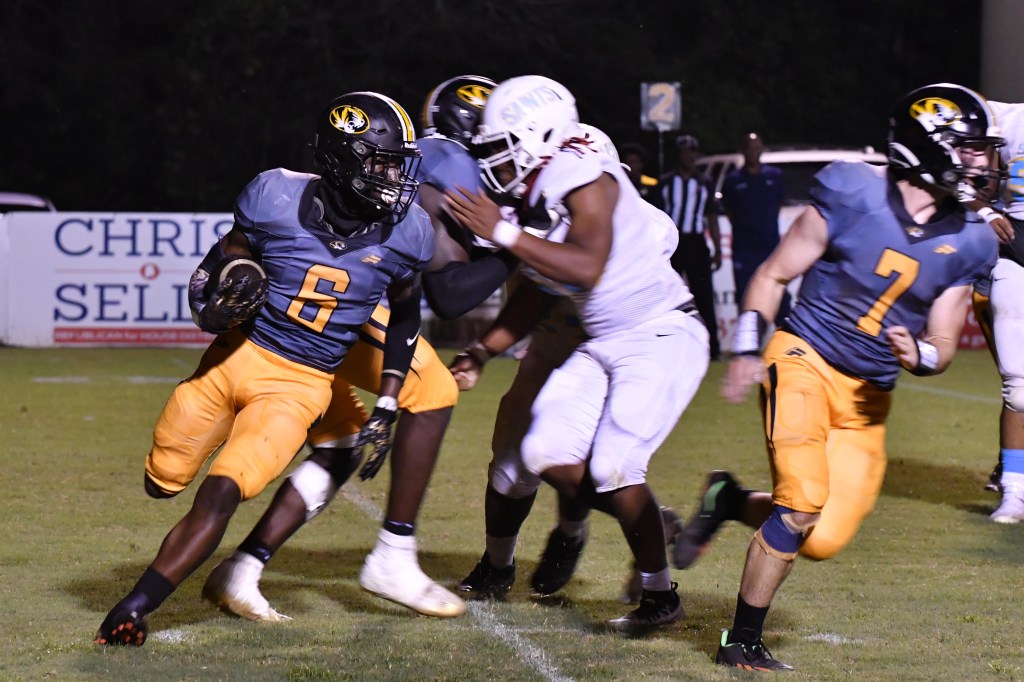 The Tigers’ defense allowed the Saints to churn up 204 yards on the ground and score three rushing touchdowns.

Browning said his team played extremely hard, but the success in practice didn’t manifest into a victory on the field.

“They had a great week of practice, and they played their guts out,” Browning said. “I told them after the game, ‘Right now, we have to go back to work.’ They know we’re young. You can look at the roster and see how young we are right now. I tell these seniors they have to keep being leaders, encouraging these kids on the sidelines, and just keep getting better each week.”

Selma senior running back Roderick Ward led the charge with 119 yards rushing on 16 carries with one touchdown and a reception for 31 yards. Ward’s 40-yard touchdown run on his third carry of the game and a successful 2-point conversion run by quarterback Marcus Walton gave their team an 8-0 lead with 3:05 to play in the first quarter..

“Those two guys have been carrying us all year,” said Saints head coach Willie Gandy. “We’re just leaning on them guys. They’ve been running hard for us, and we’re just going to lean on those guys until they can’t run it anymore.”

Walton added a 5-yard yard touchdown run of his own midway through the second stanza and converted on his second 2-point try to extend the Saints’ lead to 16-0.

“I’m so proud of my offensive line tonight,” Gandy said. “We’ve been having so many injuries with the offensive line. We’ve got two of our starting tackles out tonight, and we had two backup guys that had no experience on Friday night. They came out and played a heckuva ball game.”

Greenville’s lone trip to the red zone late in the first half yielded the Tigers’ only touchdown of the game via a 6-yard run by quarterback Bobby Bedgood. Bedgood’s incomplete pass on the 2-point conversion left the Tigers trailing 16-6.

The Tigers entered the third quarter with enough time left in the game to rally back, but back-to-back drives resulting in pick-6s put the game out of reach.

Selma free safety Kendarious White picked off Bedgood on the Greenville 12-yard line and made the short trip to paydirt. Walton punched in his third conversion to widen the gap to 24-6.

Bedgood drove his team closer to the end zone, but a fourth-and-long pass over the middle fell into the hands of four-star safety and Penn State commit DaKaari Nelson, who jetted down the Greenville sideline for a 90-yard interception return touchdown to go up 30-6.

Selma’s side of the field featured a cameo appearance by Penn State head coach James Franklin, who arrived via helicopter prior to the start of the game and departed during halftime.

“That’s an awesome feeling, just coming from Selma,” Gandy said of having the head coach on hand to get a live look at Nelson. “DaKaari Nelson is a heckuva kid. James Franklin, they flew in on a helicopter. That was awesome. Our kids had never seen anything like that, so it was just awesome to have Coach Franklin and Coach (Anthony) Poindexter come down and watch DaKaari.”

Walton scored his second touchdown on a 14-yard run inside the final minute of the contest. The senior finished his night with 13 carries for 75 yards and two scores and went 1-of-5 for 31 yards through the air.

Greenville running back Ronald Davis led his team in rushing with 71 yards on 18 carries. The Tigers’ offense finished with 154 rushing yards and 22 passing yards.

Browning said the team will work harder when it comes to penalties. While the eight penalties for 60 yards were less infractions than in previous contests, several penalties resulted in stalled drives for the Tigers.

Greenville (1-3) will travel to Wetumpka on Friday, while Selma (3-2) will host Class 6A Park Crossing.