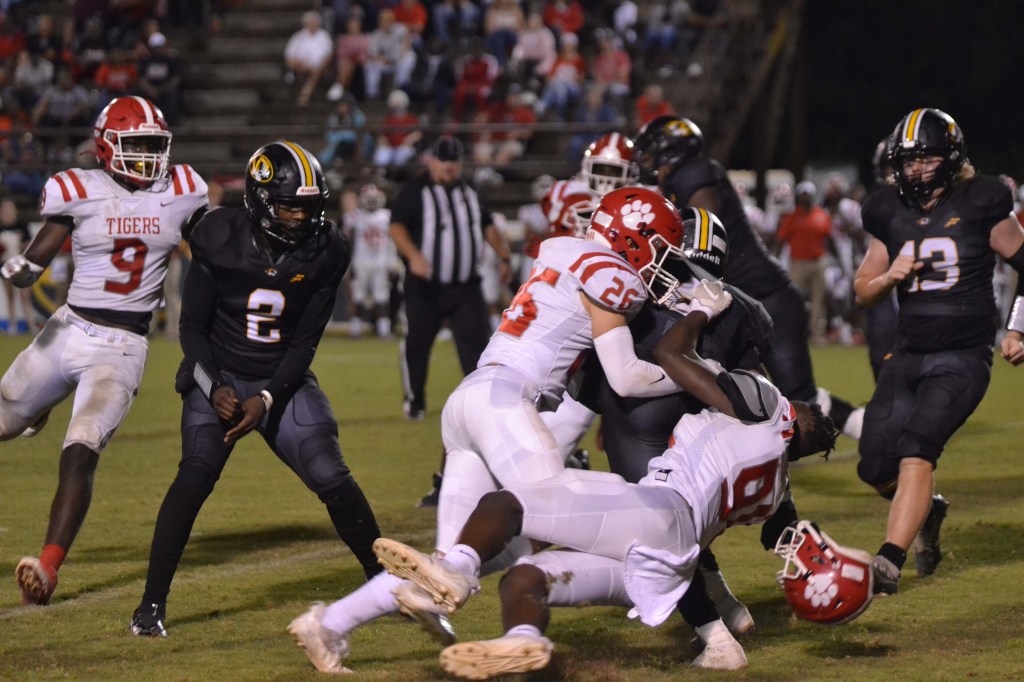 The hometown Tigers fell to the visiting Tigers, 43-7.

“Coach (Jerrell) Jernigan, first of all, he’s doing a great job at Eufaula,” said Greenville head coach Patrick Browning. “They’re a great football team, and I expect them to make a run in the playoffs, first and foremost.

“Second of all, our youth really started showing tonight. We’re starting 12 sophomores and two freshmen. That ultimately is what bit us tonight – a lack of experience. These guys have got to learn to deal with adversity in the right way, and how to overcome negative plays. If we quit shooting ourselves in the foot, we just play good fundamental football on both sides of the ball, and we continue to get better throughout the season, we’re going to be fine. What we cannot do is let it compile and start to snowball, and that’s a little bit of what started happening.”

A pair of seniors, Ronald Davis and Christian Hill, provided bright spots for Greenville in the loss.

Davis, who notched an interception on defense in the first half, checked in at running back for the second half and led the team with 96 yards on nine carries with a 41-yard rushing touchdown to prevent a shutout.

Hill’s contributions came via special teams, where he used his leg to flip field position with some booming punts.

“Those are two seniors who are being as positive as they can be, uplifting these young guys, and just making them grow up as fast as possible,” Browning said. “The bottom line is at the end of the day, those guys know we’re young, and they know the spots we’re inexperienced at. They’re playing their guts out and helping us anyway they can to win. They’re cornerstones of our team right now, and they’re going to continue helping us get better each week.”

“It was a big win for us,” Jernigan said. “The defense played tremendously. Our offense has been moving the ball the past two games, but this game, we (threw) it a little bit more. Our offensive line continues to get better, and we ran the ball.”

Greenville ran 15 total offensive plays in the first half, with just two occurring in Eufaula territory.

“The shifts weren’t a problem,” Browning said of the offensive woes. “They’ve been doing a great job of those. The issue tonight had to do with our backfield. What was going on in the backfield, I still need to watch film and figure that out, but we made some substitutions, and it seemed like, besides fumbling the first play after halftime, it got a lot cleaner and a lot better.”

Eufaula added a 4-yard touchdown run by Jaquavious Moss and a 3-yard run by Harris to extend its advantage to 43-0 entering the final quarter.