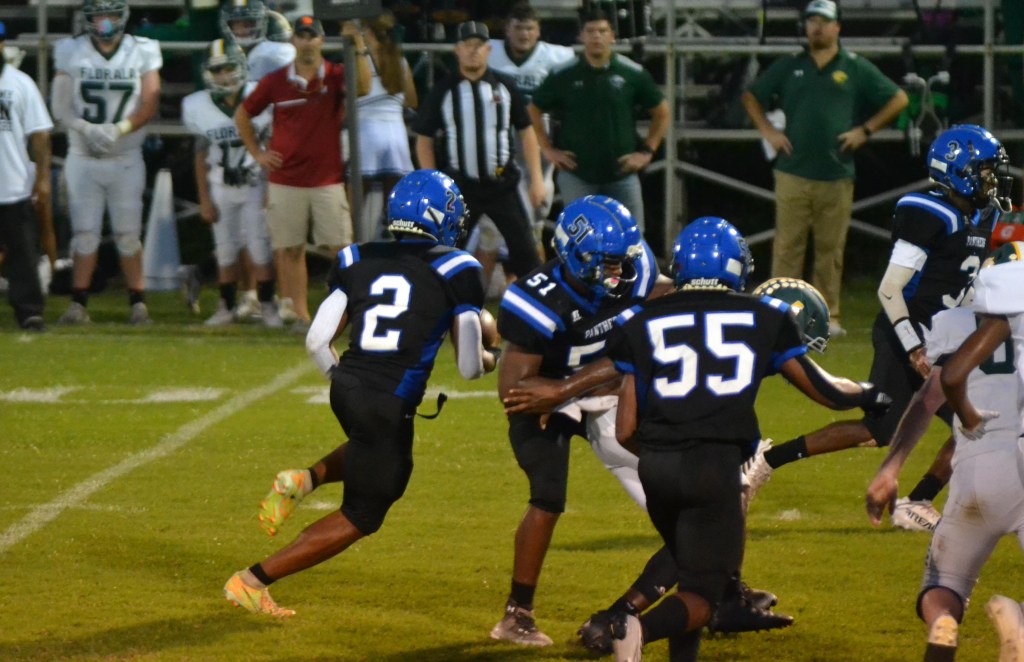 Georgiana running back Cam Miles follows his blockers on a 40-yard touchdown run in the first quarter against Florala. The Panthers prevailed over the Wildcats, 20-14, to remain undefeated.

Georgiana High School’s football team showed it has Miles of talent in its 20-14 victory against Class 1A, Region 2 foe Florala at Harmond Field on Friday night.

Panthers junior running back Cam Miles led his squad in rushing with 102 yards and a touchdown on 13 carries, while sophomore athlete Kaveon Miles caught a touchdown pass, threw a touchdown pass, and secured a game-clinching interception in the closing seconds of a hard-fought battle with the Wildcats.

“I hate to keep repeating the same thing over and over again, but he’s a dog,” said Georgiana head coach Berry Bess when discussing Kaveon’s contributions. “We’ve got some kids that can play, but the level that he knows the game, and the level that he plays it as a sophomore – he’s aggressive. I love him to death.

“He does a great job. Like I’ve said before, he’s becoming a leader for us. The team responds to his energy, and we just play better. I’m so proud of him, and I’m more proud of this team.”

Kaveon made his presence felt on the Panthers’ first two offensive plays. He caught a pair of passes down the right sideline from sophomore quarterback Jacobie Morgan.

The first catch covered 38 yards, while the second resulted in a 21-yard touchdown for Georgiana with 11:17 to play in the opening stanza. The Panthers failed on a 2-point conversion attempt to leave the score at 6-0.

For the second consecutive drive, Georgiana would score in just two plays. Cam burst through the Wildcats defense on a 40-yard go-ahead touchdown run, then punched in a run on the 2-point try to take a 14-6 lead.

Panthers senior defensive back Nehemiah Altidor picked off a Coleman pass to set up Georgiana’s final scoring drive of the contest.

On fourth-and-5 from the Florala 30-yard line, Kaveon, taking the snap at quarterback, fired a 30-yard pass to sophomore wide receiver Jalen Crenshaw for a touchdown. Georgiana failed on the 2-point conversion attempt, but the drive extended the Panthers’ margin to 20-6 with 2:12 left in the first quarter.

Early in the second quarter, the Wildcats reached the end zone a second time via Coleman’s legs. He scampered 25 yards through the Panthers defense and added an additional 2 on the conversion, but his squad trailed 20-14.

For the remainder of the contest, both teams would squander opportunities as they racked up penalties, committed turnovers, and struggled to generate offensive plays in critical moments.

The latter doomed Florala, whose best shots at pulling ahead of Georgiana came in the closing moments of both halves.

With 1:29 remaining in the first half on a fourth-and-goal play from the Georgiana 9-yard line, Cam crashed through the right side of Florala’s offensive line to sack Coleman.

“Cam never gets out of his mode,” Bess said. “He’s always locked in.”

Coleman’s final stand came on a 4th-and-20 from the Georgiana 24-yard line with under 30 seconds to play. His pass to the left side of the field was intercepted by Kaveon at the 7-yard line, and he streaked down the Georgiana sideline on a 83-yard return that set up Morgan’s kneel down to end the battle.

The game-sealing turnover counteracted Georgiana’s struggles throughout the contest. Among the Panthers’ miscues were two fumbles lost on special teams, two defensive plays that should have been interceptions, and a 53-yard touchdown pass from Morgan to Kaveon negated by an illegal procedure penalty.

Georgiana finished the contest with 11 penalties for 94 yards, with four of them of the 15-yard variety.

“When we come in Monday morning, we’ll address those,” Bess said of the penalties. “That’ll be the first thing we address because we can’t be undisciplined. We’ve got to be disciplined.”

Despite the obstacles, Bess’ squad showed grit and resolve against a program that beat them 41-14 a season ago. Although his team is playing with a chip on its shoulder in what he’s dubbed as a “revenge tour,” Bess added they’re not getting ahead of themselves.

“We’re just taking it one week at a time, and trying to progress each week …” he said. “In the progress we’ve made so far, I’m excited about it. I’m really excited.”

Wildcats head coach Jordan Cantrell showed grace in defeat and noted his squad of 25 fought to the end against a talented bunch.

“It was a hard football game,” Cantrell said. “We just didn’t execute right when we needed to. They made plays. We made plays. We just came up short. They (Georgiana) are a good football team. They’re ready to rock and roll, and they’re on cloud nine right now.”