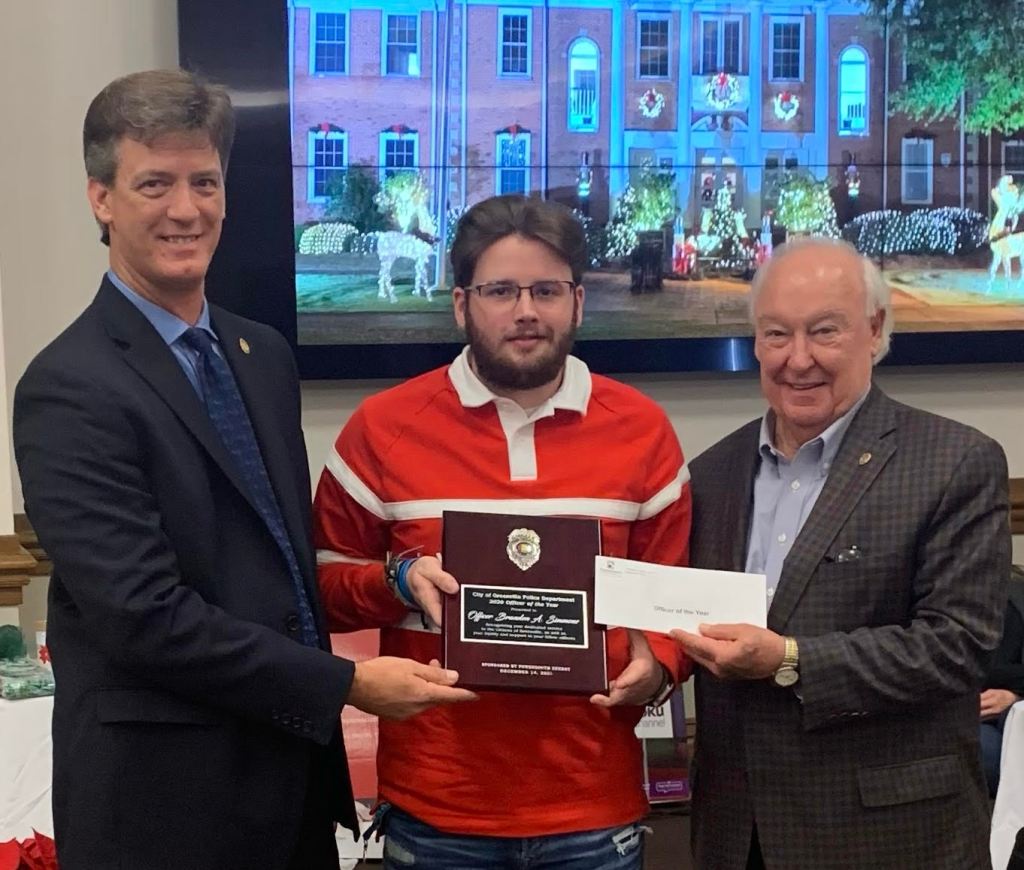 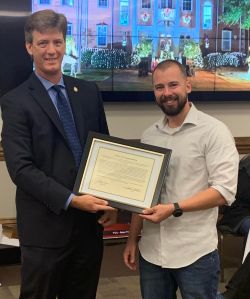 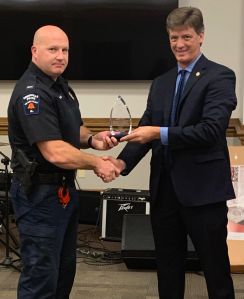 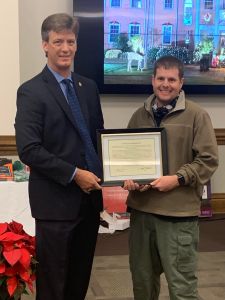 The Greenville Police Department recently recognized a few of its officers for outstanding service during a December 14 ceremony. These awards are normally handed out during the Police Officers Memorial Service, but due to Covid concerns and the large number of people that normally attend, we have not held the event in the last couple of years. We hope to once again host this event like normal in May of 2022.
Last Tuesday, four officers were each given a Letter of Commendation along with a Life Saver Award for risking their own life to save the life of another. First, was Senior Lieutenant Curtis Miller and Corporal Brandon Simmons for their efforts in saving two lives during a house fire. The two officers were the first to arrive at a fully engulfed house fire on March 10, 2020. The two risked their lives in an attempt to enter the house. They were unable to make it back to the bedroom due to the overwhelming smoke and fire that had engulfed the room. They exited the house and went to the bedroom window. They broke out the window and yelled for anyone inside to come to their voice. Lt. Miller and Cpl. Simmons guided two voices they heard coming from inside to the window and pulled two individuals out of the house. They escorted them to safety and rendered first aid until paramedics arrived. The two they rescued were transported to the hospital and have since made a full recovery.
The next to receive a Commendation and Life Saver award was Officer Christopher Gagliardi. On January 21, 2021, Off. Gagliardi responded to a report of a single vehicle accident in the area of Bolling St. Off. Gagliardi arrived and observed pieces of a vehicle that had apparently struck a retaining wall and then continued to drive away from the scene. He followed a trail of fluid that was leaking from the vehicle until he came across a disabled and badly damaged vehicle in the roadway a few blocks away. The vehicle was also on fire by the time Off. Gagliardi arrived. The smoke was so bad in the driver’s compartment that he could not tell if anyone was inside the vehicle. He opened the driver’s door and found the driver still inside the vehicle. He pulled the driver out and took him to a point of safety. He then obtained the fire extinguisher from his patrol car and put out the vehicle fire. The driver was checked by paramedics and cleared of any injuries. Off. Gagliardi did determine that the driver was under the influence of alcohol and arrested him for Driving Under the Influence. The driver registered twice the legal limit when tested at the jail.
The last Officer to receive a Commendation and Life Saver Award was Corporal Carlton “Tony” Jordan III. On April 5, 2021, Cpl. Jordan was the first officer to arrive on the scene of a single vehicle accident on South Conecuh St. The driver of the vehicle stated that he had swerved to miss an animal in the roadway and struck a tree. As Cpl. Jordan approached the accident scene, he realized that the driver was entrapped in the vehicle and a fire had started. Cpl. Jordan opened the drivers door and worked vigorously to free the driver whose leg was trapped underneath the dashboard. Cpl. Jordan was eventually able to pull the driver from the vehicle and with the help of other officers, who had just arrived on the scene, escorted him to safety. The driver received first aid for a large laceration to his leg and was transported to the hospital.
Another award presented was the Gary Wayne Heath Education Award, sponsored by Camellia Communications. This award is given to the officer who is dedicated to improving educational standards for the department and all those in the department. The award was given to Sergeant Chad Herring this year for his never ending efforts to train and improve other officers within the department. He has recently received his firearms instructor certification and works with every new officer to improve their shooting skills and ensure they meet the standard for our department and the police academy. Sgt. Herring has also developed in-house training to improve all certified officers in various disciplines. He is an individual who is committed to continuously improving not only himself, but all those around him. This award also comes with a $250. check thanks to it’s sponsor, Camellia Communications.
The final award for the night was the prestigious Officer of the Year Award for 2020 sponsored by Power South and Mr. Horace Horn, Vice President of External Affairs. Corporal Brandon Simmons was chosen as the recipient. Cpl. Simmons was nominated by his fellow officers and selected out of a small group of other officers who were also nominated. Cpl. Simmons, who was already awarded a Commendation and Life Saver Award for 2020, has also made a huge impact in many other ways. He continues to step up to help other shifts when they are short handed. He is a positive role model for fellow officers and trainee’s. He is a member of the Special Response Team and has assisted them in successfully resolving numerous high risk incidents. In addition to this, he has gone above and beyond to assist the Butler County’s E-911 Emergency Services by filling in as a dispatcher when they are short handed because of his prior training as a E-911 dispatcher. Cpl. Simmons is a true example of selfless service, hard work, and a love for his community and all those in it. This award also comes with a $500. check thanks to it’s sponsor, Power South.
The five officers who received these numerous awards are an example of the Greenville Police Department’s commitment to serve our citizens no matter what the risk. Each of these officer’s actions were essential to the positive outcome in which a life was saved. Their exemplary service reflects great credit upon themselves and the City of Greenville.