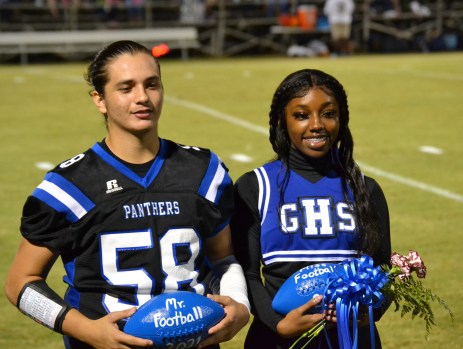 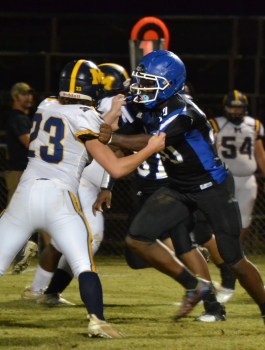 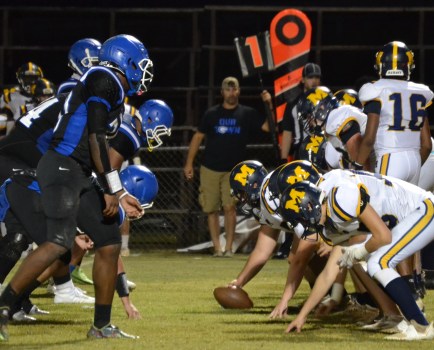 McKenzie gets ready to snap the ball

The McKenzie Tigers beat the Georgiana Panthers on the road during Friday’s conference game 42-6.

McKenzie was the first to score when Kamern “Bo” Daniels made a 39-yard touchdown run.

Following an interception by Zanderion Cook near the Georgiana 40-yard line, Daniels ran for 29-yards to set the Tigers up with a first and goal near the eight-yard line.

Jakarrie Mcpherson scored for the Tigers with a three-yard run shortly after.

Jaylen McMillian threw a 25-yard touchdown pass to Cook to extend the Tigers lead in the second quarter’s opening. The extra point attempt was no good.

Daniels extended the Tiger’s lead after securing a 35-yard touchdown run with eight minutes left in the second quarter. Jakarrie Mcpherson then scored the two-point conversion for the Tigers.

During the Panther’s drive, Cook intercepted the ball, giving the Tigers control at the Georgiana 45-yard line.

At halftime, the Tigers led the Panthers 42-0.

McKenzie received the ball to start the second half.

The second half was played in six-minute quarters.

Neither team scored in the third quarter.

Georgiana scored in the fourth quarter after a one-yard run by Dre’shon Jones.

Daniels was named the Player of the Game for McKenzie. Daniels had 192 rushing yards, nine carries, 21.3-yards carried, and two touchdowns throughout the game.

McKenzie ended the game with 349 total yards with 289 rushing and 60 passing.

With the win, the Tigers improved to 6-4 for the season.

McKenzie will face the Keith Bears on the road this Friday.