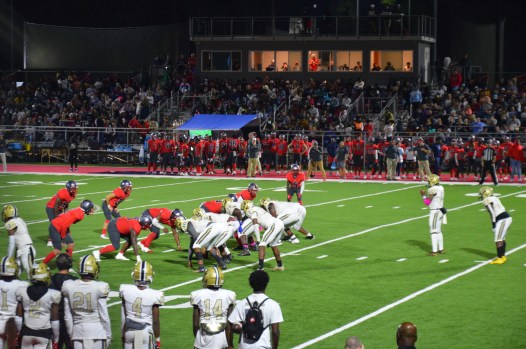 The Greenville Tigers face off against the Pike Road Patriots

The Greenville Tigers were shutout by the Pike Road Patriots during Friday’s Region 2 Class 5-A Championship game.

The Patriots scored 31 points over Greenville within the first half of the game.

The Tigers received the ball to start the second half. Despite running the ball to the Pike Road 49-yard line, the Tigers were no match for the Patriots defense and were forced to punt away.

Shortly after regaining control of the ball, the Patriots outmaneuvered the Tiger defense to secure their fifth touchdown of the night.

The Patriots went on to score their sixth touchdown within the first minute of the fourth quarter.

The game ended with a 44-0 loss for the Tigers.

Zakarrie Scott was selected as the MaxPreps Offensive Player of the Game for the Tigers.

With the loss, the Tigers sit at 8-2 for the season.

Tigers Head Coach Josh McLendon attributes the loss to not starting the game on the right footing.

“We didn’t start the game out right and we just couldn’t recover,” McLendon said. “Sometimes things like that just happen. But it’s important to remember to come together and regroup afterwards so that you can go into the next game doing your very best.”

The Tigers will face the Carver Montgomery Wolverines for Senior Night this Friday.