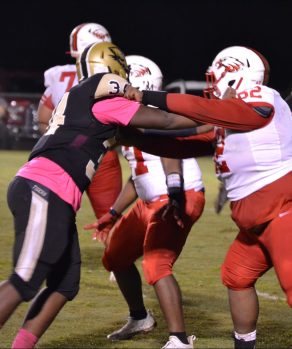 The Greenville Tigers beat the Carroll Eagles in Friday’s home conference game with a final score of 20-7.

Carroll received the opening kickoff and began their opening drive on their 42-yard line.

Despite running the ball to the Greenville 26-yard line, an incomplete pass on fourth down allowed the Tigers to take over on downs on their 26-yard line.

A fumble recovery by Carroll moments later put them within striking distance of a touchdown at the Greenville 14-yard line.

The Tiger’s defense managed to hold them off and forced them to kick for a blocked field goal.

The game’s first score occurred when the Tigers running back Ka’tyleon Phillip secured a nearly 30-yard touchdown towards the end of the second quarter.

The Tigers then tried for a two-point conversion but were unsuccessful.

Greenville received the kickoff to start the second half. A massive return by Jacob Foster set the Tigers at the Carroll 42-yard line to start their drive.

After running the ball to first and goal at the Carroll five-yard line, Tigers quarterback Andre Davidson ran the ball into the end zone for their second touchdown of the night.

The Tigers then secured a two-point conversation after Phillips dove to catch the ball in the end zone.

At the end of the third quarter, the Tigers led the Eagles 14-0.

Although Carroll scored after a 22-yard run in the fourth quarter’s opening, a pick-six by Brandon Boggan at the Greenville 34-yard line secured the Tiger’s victory.

The game ended with a win for the Tigers..

Greenville Head Coach Josh McLendon said that although this season has had a few disappointments, he is hopeful for the future.

“We’ve played good a few times and not so good a few times,” McLendon said. “Defensively, we’ve been strong all year. We have to continue to work hard and stay aggressive. Good things can happen if we do.”

Greenville will play a conference game at Andalusia this Friday.