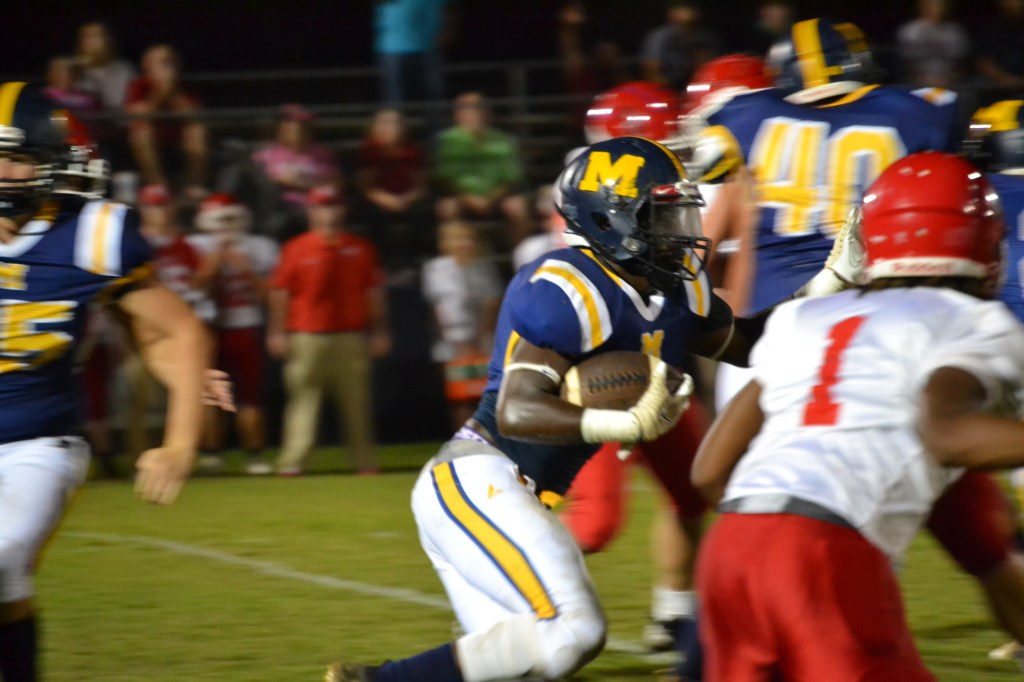 A McKenzie Tigers runs for a first down

Pleasant Home was the first to score after Mason Anderson completed a 17-yard rushing touchdown.

Failing to secure the extra point, Pleasant Home led the McKenzie Tigers 6-0 with eight minutes left in the first quarter.

The Tigers then received the ball at their 34-yard line.

Trey Rudolph  ran the ball three yards to the 37-yard line for McKenzie. The Tigers scored on their second drive after a successful 63-yard rushing touchdown by Kamern “Bo” Daniels.

Missing the extra point, the Tigers evened the score 6-6.

McKenzie received the ball at their 36-yard line to start the third quarter.

The Tigers then ran the ball into Eagle’s territory. After an offside call on Pleasant Home, McKenzie was first and goal from the seven-yard line. The Tigers walked the ball into the end zone for a touchdown.

After a failed two-point conversion, the Tigers lead the Pleasant Home Eagles 20-6.

The Eagles could not make the first down after the punt return and punted back to the Tigers.

The Tigers  ran the ball downfield for a touchdown. Failing to secure the extra point, the Tigers led the Eagles 26-6.

The Eagles then received the ball at their 32-yard line. Like their previous possession, the Eagles could not secure a first down and punted after to the Tiger’s 32-yard line.

The Tigers ran the ball to the Eagles 28-yard line to end the third quarter.

Following the start of the fourth quarter, Tigers wide receiver Zanderion Cook ran the ball to a first and goal at the five-yard line. Travarius Rudolph ran the ball for the touchdown.

The Tigers completed a two-point conversion.

The Pleasant Home Eagles tried their best to score after gaining possession but were unsuccessful.

After regaining possession of the ball, McKenzie scored a final touchdown and held off the Eagles in the game’s last play to seal their victory with a final score of 40-6.

McKenzie will face off against the Kinston Bulldogs at home this Friday.