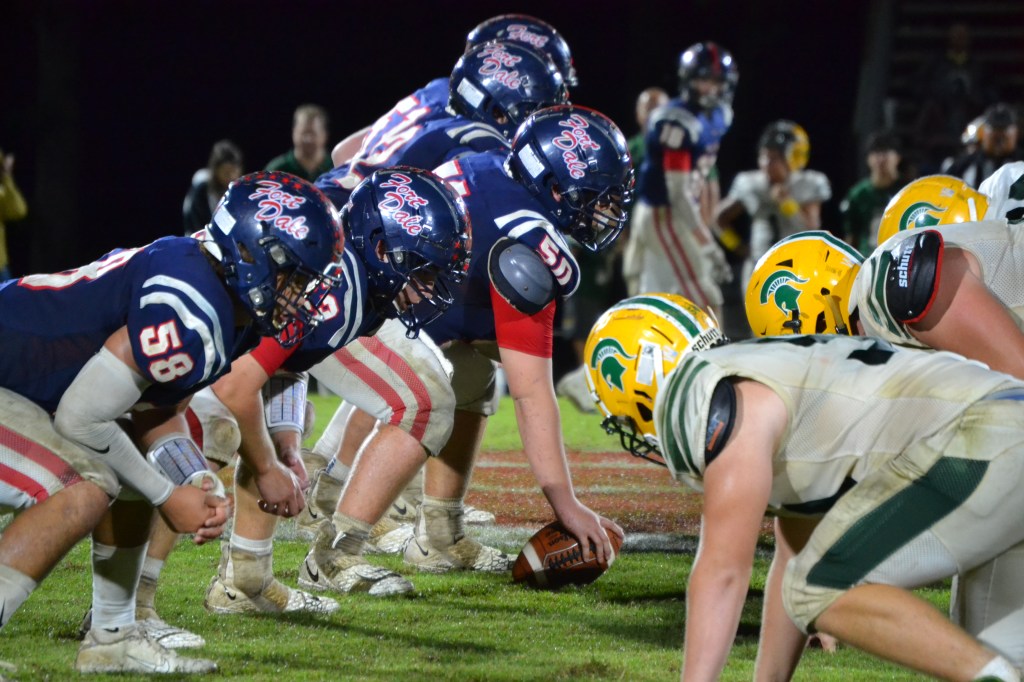 Fort Dale gets ready to snap the football

Sparta Academy made the first score of the game in the first quarter after a successful rushing touchdown and two-point conversion.

Minutes later, a fumble recovery near the 10-yard line allowed the Eagles to score. And after a 31-yard touchdown pass, the Eagles shortened Sparta’s lead 8-7.

Although the Eagles had shortened Sparta’s lead by one, the rest of the first half proved to be a challenge for them. The Spartan offense consistently broke through the Eagle defense, and the Ealgles’ lead continued to grow.

By halftime, the Spartans led the Eagles 29-7.

Throughout the game, quarterback Ethan Alford had 55 rushing yards with 333 yards and completed 29 of 35 passes.

Sam Bloodworth led the team with 11 catches, one touchdown, and 181 yards.

Alan Alverez had four catches for 97 yards and two touchdowns.

Sterling Arnold had five catches for 55 yards and one touchdown.

Undeterred by the loss, Eagles Head Coach Eric Folmar is confident that his team is improving each week regardless of what the scoreboard says.

“Our focus throughout this season has always been to continue making improvements each week. We were certainly disappointed to lose Friday night’s game, but I think we have continued to accomplish that goal. Sparta has a good quarterback, and we knew they were going to be a challenge for us. Our defense could have been better, but the team’s performance in the second half made me proud. Each week we try to be better than we were,” Folmar said.

The Eagles will play Hooper Academy at home this Friday.