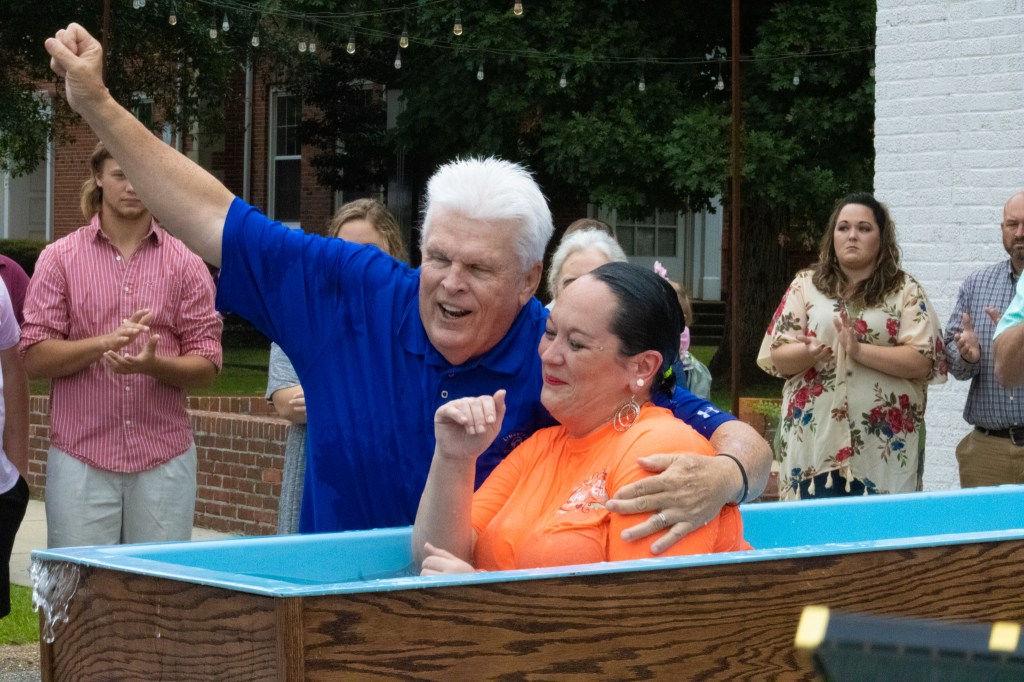 This past Sunday, Gracepoint Greenville decided to shake things up. The non-denominational church located on Commerce Street in downtown Greenville baptized 12 people in the name of Christ. The unusual part is that the baptisms took place outside, feet from the street, for all to see.

Rick Ousley, the pastor of Gracepoint Greenville, performed the baptisms. He addressed the family and friends with kind words regarding each person’s hardships and triumphs.

Ousley said he chose to do the baptisms outside because he wanted to make a difference in people’s lives.

“It is not that we were trying to stop traffic or attract a crowd. It was just that we are unashamed of anything we are doing and wanted them (one’s being baptized) to have that joy. It meant more to them to be out there than if they were to be hidden back there (in the church).”

Brad Jones, music director at Gracepoint, said they have been in the new building for two years now and being able to perform the event outside was a blessing since the church really didn’t have the room to perform it inside.

Jones wants the message that everyone, regardless of status, sins, or troubles, is welcome at Gracepoint.

“We want to be that kind of faith family that goes into the ditch to get people who are struggling, who normally wouldn’t be here, wouldn’t be in church. We know eternity is a long time, and those people matter too,” Jones said.

The church has no membership. According to Jones, “Whoever joins us that day, that is who the family of faith is.”

“When people walk through the door here with their need of things of God and people to love them,” Jones said, “they don’t join our church, but we want to join them in their lives. And I think that is the most important thing in life and what Gracepoint is about.”