Thompson recognized for her contribution to education 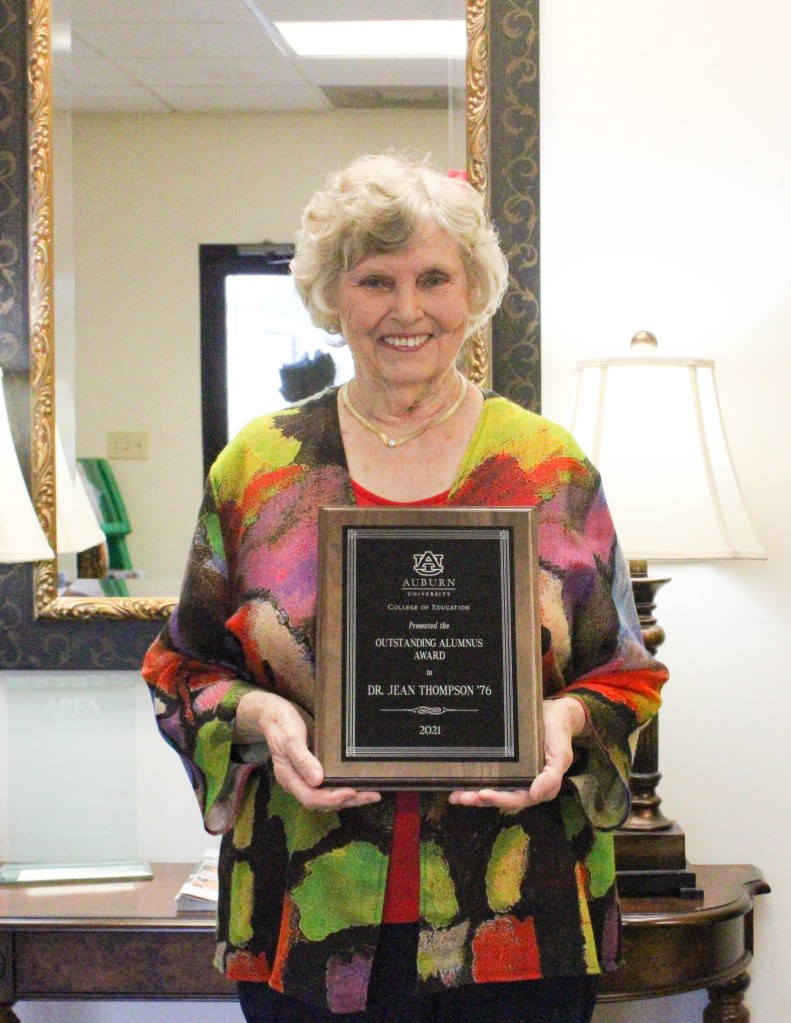 Dr. Ashley Powell, Auburn University Alumnus, nominated Thompson for the award. “I was just so surprised when they told me,” Thompson said remembering finding out she won. “Governor Kay Ivey won this award and I can’t believe I won something she did.”

Thompson devoted her life to education. She not only sought her own by obtaining two degrees at Troy University, a Sixth Year Certificate in Counseling Psychology at Auburn and following up with her doctorate in Higher Education Administration at Auburn, she also devoted her life to teaching others, 51 years to be exact.

Originally from Crenshaw County, Thompson searched for a teaching position to no avail. The DeKalb County school system hired Thompson right away in 1959, knowing what an asset she would be to their school. She stayed in DeKalb for 34 years before retiring.

Following her prestigious career at DeKalb, Thompson moved back to Alabama and began working at Lurleen B. Wallace Community College.

“I told them I was only going to work maybe 10 years, but everyone was so nice and the students were so great I ended up staying almost 18 years,” Thompson said.

At LBW, Thompson helped to get the college going at the Greenville campus. She developed the duel enrollment program for the Butler County School System.

In 1997, she worked as the Southern Association of Colleges and Schools self-study director and was named outstanding junior college faculty member.

In 2004, she was named outstanding community college faculty member and was a nominee for the Alabama Community College Chancellor’s Award in 1997 and again in 2004.

Thompson has been recognized for her work with the LBWCC- Camelia City Classic Golf Tournament by the establishment of the Dr. Jean A. Thompson Endowed Scholarship with LBWCC Foundation.

Thompson has won numerous honors and awards throughout her career. She is also very active in her community and church.

In Greenville and Butler County, Thompson is a member of the Rotary Club and served as first woman president in 1997-98. She has been a three time recipient of the Paul Harris Fellow, 15 year Chair on the Greenville Rotary Club Scholarship Committee, nine year chair and member of the board at L.V. Stabler Memorial Hospital Board of Trustees, past president of the Butler County Historical Society, six year on the Greenville Area Chamber of Commerce membership and service on Board of Directors, Sasanqua Garden Club President 2010-12, 15 years Greenville Area Arts Council and on Board of Directors, and Greenville District I City Council 2004-12.

Thompson is very active in her church, First United Methodist Church of Greenville where she has been a member since 1993. She has served on the church council and was a past chair and first female chair. She spent 3 years on the pastor-parish relations council, Board of Trustees and nominations committee.

Thompson has been a Sunday school teacher and was an Alabama West Florida Methodist Conference representative and higher education council chair.

Thompson is the daughter of the late Aubrey and Cleone Alford of Luverne, Ala. Thompson said her parents were extremely proud that both their daughters, Thompson and her sister Dr. Pat A Floyd of Luverne, Ala, both received doctorate degrees. “Something that was unheard of at the time,” Thompson said. “Two boys maybe, but we were the only two girls that I know of to both receive doctorates.”

Thompson is still active in her community even though she is retired from teaching. She plans to remain in Greenville and can’t see herself living anywhere else.