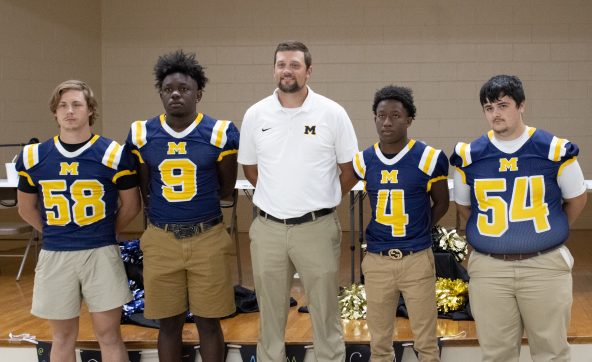 McKenzie Head Coach Drew Luker had a lot to say about his team’s improvement during the live Q&A panel at the Greenville Kiwanis Club’s Coaches Corner event.

Coach Luker responded to questions about any changes he made to immediately improve the team during his first year with the program.

Luker said the first thing he did was push conversations about winning championships with the players and getting them to believe they could achieve such a goal.

“When I came in, I immediately started talking about the tradition that McKenzie has,” Luker said. “We didn’t shy away from talking about championships early on. I pushed the idea with them. I worked on getting them to believe in themselves. They took to that quickly, and that made me extremely proud of them. That same idea goes for this season. We want nothing less than having the mindset of winning the region or a championship.”

Besides working on their confidence, Luker said that he wanted to make sure players took advantage of the weight room to improve their strength and conditioning.

“I talked to the kids after the last game last season and put a great deal of importance on the weight room,” Luker said. “They took advantage of it, got bigger and stronger, and I think that will help us going into this season.”

In addition to being asked how he has improved the team, Luker was asked for his thoughts on McKenzie’s preseason ranking.

Luker responded that while their ranking isn’t where they would like to be, he views their current rank positively.

“We’ve ranked eighth for the preseason in the state of Alabama in Class 1 A,” Luker said. “I use that ranking as a positive thing, as a program, to get to where we are going. It’s a good thing to see we are in the top ten. We don’t want to stay there; we want to move up, but we are going to use it as a positive.”

Luker was offered a head coach position at  W.S. Neal, but declined stating he is where he needs to be.

“My decision to decline that offer all comes down to the commitment and the love I have for the kids and the school,” Luker said. “My wife and I prayed about it. However, it just wasn’t the right decision for us. Great things are happening to McKenzie right now beyond just football. I’m excited to be here and see that unfold.”

To listen to the entire Q&A session, go to the on-demand section on the Q94 app.