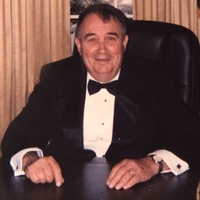 Mr. Bobby Hubert Terrell, 84, a resident of Greenville, AL died on April 18, 2021 at Regional Medical Center of Central Alabama. A funeral service was held Thursday, April 22, 2021 at Walnut St. Church of Christ with Minister Charles Box and Minister Jordan Alker officiating and Dunklin Funeral Home directing. A burial was held at Magnolia Cemetery after the service.

Bobby Hubert Terrell was born to Leslie Hubert Terrell and Dorothy Wiginton Terrell in Excel, Alabama, on June 21, 1936.  He had a sister, Gloria Terrell, and 2 brothers Lt. Colonial Tommy Terrell (and wife Pam) and Dr. Joe Frank Terrell (and wife Debbie).  Bobby spent his early years in Georgiana and Greenville.  Bobby was quite the athlete and was named to the All-District Basketball team in the 9th grade and was named as an All American in football, winning numerous other awards in both sports in his high school career. In addition, he set state records in low hurdles and track. In 2012 Bobby was inducted into the GHS sports hall of fame.

He graduated from Greenville High School in 1954, and received a football scholarship to Auburn University, but due to a knee injury, he transferred to Troy in 1957 where he played basketball and tennis. He graduated from Troy University in 1959, and after graduation, he coached football and girls’ basketball in Blakely, Ga until 1961, when he began at GMAC in Lake City, Florida.  It is there where he met and married the love of his life, Mary Lou Ella Edenfield Brannon in 1963.  As a new husband, he also became the father of 3 little ones, Cindy, Al and Darlene Brannon, who he loved as his own until his last breath. Bobby and Mary Lou had Angie later, and then in 1966, they moved to Greenville. Bobby worked for American Seating Company until he started his own company, Terrell Enterprises, in 1975.  Bobby won numerous national sales awards. Bobby loved to cook and to talk to people, so in 1973, he opened Pasquale’s Pizza.  He thoroughly enjoyed his time there and of course bragging that he made the best pizza.

Through the years, Bobby was involved in numerous ways in his community including: coaching little league teams, the Jaycees, the Elk’s Club, and he was a board member of Amridge University.  He was also a long-time elder at the Walnut Church of Christ, took thousands of meals to people, sang and led devotionals at the nursing home, and served on mission trips to Guyana for 22 years.  In 2013, Bobby received the Distinguished Alumni of the year award at Troy University, where he faithfully supported sports teams and donated financially.  Bobby was a lifetime member of the Republican party and he was honored as a business man of the year in Washington DC.  He was a lifetime member of the Fort Dale Academy slam dunk club, and loved his times planning his high school class reunions for his GHS class. Bobby loved going fishing, playing basketball and tennis.

Among Bobby’s proudest treasures are his 10 grandchildren (Mary Virginia Mabery, Ashley Brannon, Spence Sirmon, Dewey Brannon, Ashton Antonetti, Brannon Sirmon, Terrell Ewing, Shelley Greene, Raleigh Blackwell and Bailey Blackwell) and 12 great-grandchildren.  He loved taking them on trips and having fun playing games with them.  He proudly supported them on their sports teams, at recitals, and for their graduations.  He was one of the most generous men with what he had that you will ever know, and has helped too many people to count … in this state and around the world.

Bobby is survived by his 4 children: Cindy (and Rick) Sirmon, Al (and Dale) Brannon, Darlene (and Rickey) Nelson and Angie (and David) Blackwell.  He also leaves behind his lovely and faithful wife, whom he spoiled and adored.  When he first saw her, he told his friend he had to meet her.  Together for 58 years, they cared for their family, served the church and community, played cards until all hours of the night, and traveled the world.  They have modeled a marriage of give and take, working hard and giving generously, and most of all a love for the Lord and His church.