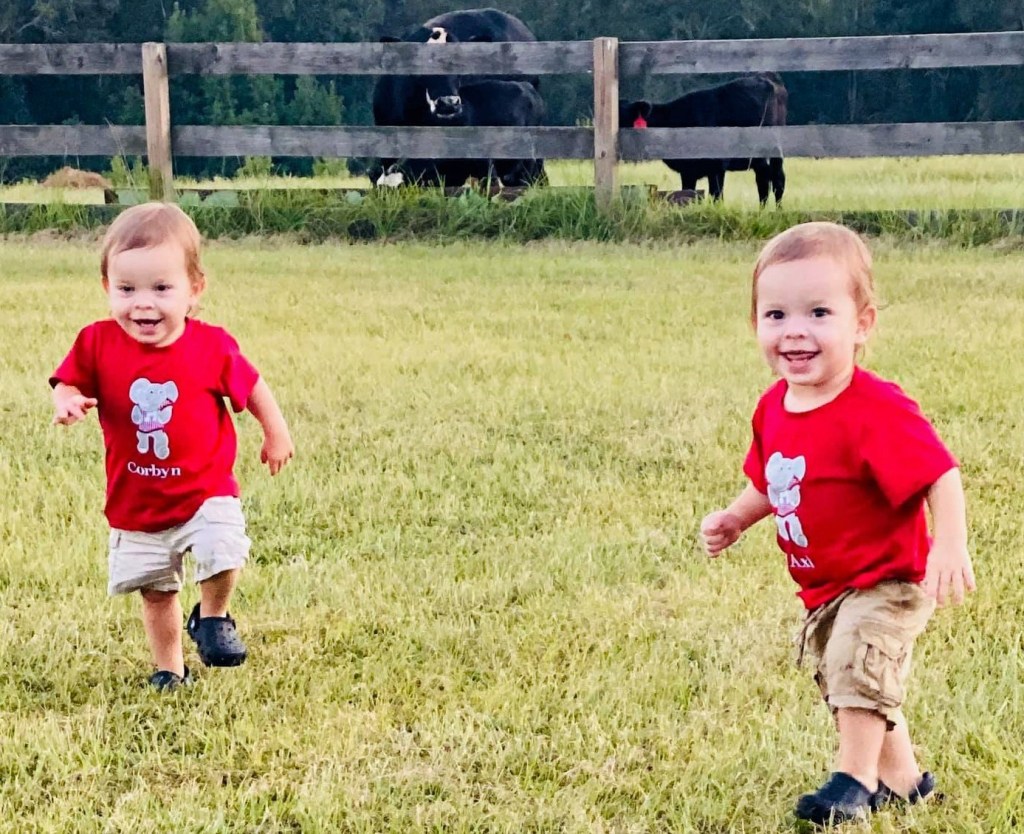 Axl and Corbyn Hartzog playing on the farm.

In neighboring Covington county, a family in Opp, Ala. are geared up for a fight to save their twins’ lives.

A few short years ago, Jeremy and Misty Hartzog turned to in vitro fertilization and surrogacy to grow their family. Jeremy, a mechanic for an oil rig, and Misty, a former Sheriff deputy for Coffee County, had to save everything they could to pay for medical costs of conception. Insurance would not cover any bills since Misty would not be the one carrying the babies.

After several failed attempts and losing twins a year prior, their last viable embryo not only took, but split into identical twins. Axl and Corbyn are by all accounts “miracle babies”.

The Hartzog’s did not have any inclination that anything was wrong until the twin’s one year check-up. Axl’s bloodwork came back abnormal. Axl was diagnosed with neutropenia due to the low white blood cell count in his blood. Neutropenia is a very rare condition with less than 20,000 cases a year in the U.S. With so few white cells, Axl was in danger of not being able to fight off any infections, even something as small as a cold could turn life threatening.

Axl was sent to Children’s Hospital for blood and cancer testing. After several tests, and a few theories, a genetic panel was performed and confirmed a genetic mutation last month. The doctors were able to confirm that Axl has Shwachman-Diamond syndrome (SDS).

SDS patients can exhibit insufficient absorption of fats and nutrients caused by abnormal development of the pancreas and impaired functioning of the bone marrow. Having SDS increases the risk of developing anemia and certain forms of cancer. Only one in 80,000 newborns are thought to have this rare condition.

Since Axl and Corbyn are identical twins, Corbyn may also have this genetic mutation. Corbyn has started mimicking some of his brother’s symptoms.

“We are waiting on genetic testing for Corbyn to be done to see if he has SDS,” Misty said. “We are praying for a miracle that he does not and that he will be the match for his brother.”

Axl is scheduled for a bone marrow biopsy on the 22 of this month and both twins have completed donor matching testing. A “Be the Match” drive is in the works for April for Axl and possibly Corbyn as well.

Even with a team of doctors from Children’s Hospital of Alabama, Boston, and Cincinnati working together to care for the boys, there are still a lot of unknowns.

Due to the increased ease of infection, COVID has been especially difficult on the family.

“The boys don’t leave our home at all unless it is to check the cows with us, or fish at their Sissy’s house. They don’t go in public at all,” Misty said.

Jeremy goes to work but is tested for COVID before every trip home. No guests are allowed in the home. The few close family members that see the boys must quarantine before entering the home and shower before interacting with the twins. Misty orders most of her supplies from Amazon but personally does all the shopping outside the home when she must restock.

Misty is hoping that the more people know her family’s story the more prayers the boys will receive.