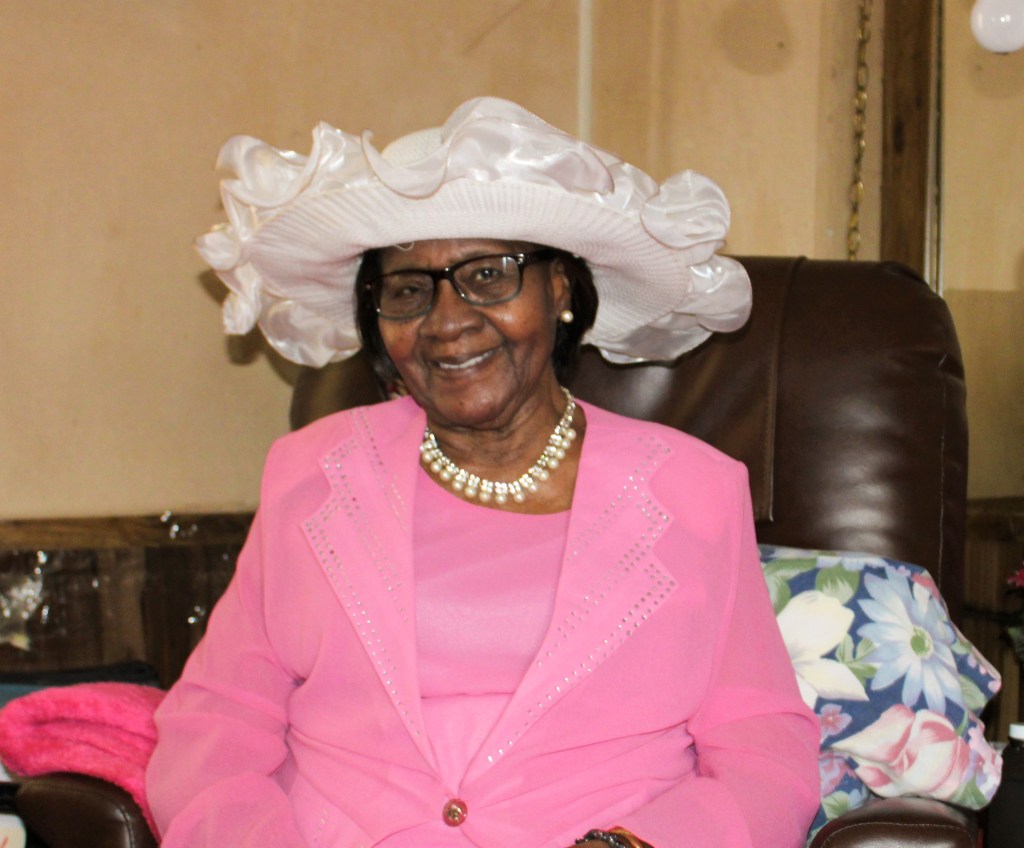 Pretty in pink, Elouise Presley Coleman looks nowhere near her age. Turning 100 years old today, she is planning to take what may come in style and with a thankful heart.

Coleman was born on March 10, 1921. She has lived in Georgiana her entire life. Raised by a widowed mother, she learned what hard work and being thankful was all about. She attended Mount Rose school for a short time but chose to discontinue her education to help her mother support the family and ensure her four siblings could attend school.

Now, a widowed mother herself, surrounded by three of her seven children, Clementine Coleman, Lillie Perdue, and Millard Coleman, she beams with pride and happiness. As Clementine and Lillie reminisce about their younger years, the love this family has for one another is evident.

Coleman spent most of her life working in the fields. Her husband was a farmer and pulpwood hauler.

“The Lord blessed us with good crops,” Coleman said. “We raised cucumbers, tomatoes, beans, peas. We sold them pretty good too.”

She would work in the field until 11 most days and then cook lunch and go back out to the field. She became known for her delicious egg custard pies and large food spreads.

“Mom always had plenty of food cooked, enough to feed anyone who stopped by,” said Clementine.

“We would try to block the door to keep our cousins out so we would have all the food,” Lillie said laughing. “Mom would have none of that. She made plenty and made sure we knew how to share.”

She still attends Springhill Baptist Church, the same church she has attended since she joined at six years old. She laughed as she recalled being asked if she wanted to be baptized and saying no because she was afraid of the water. She gave in not long after and was baptized. Coleman still loves to read her bible and does so often.

“I can remember reading 27 Psalms when I was around 6 years old. Very little schooling I got but the little I did get I remember a little bit of it,” Coleman said. “I may not have understood all the words but I understood it in my heart. I knew right from wrong.”

The church asked Coleman to teach Sunday school many years ago. She did not want to do it, afraid her lack of education would be an issue. The church assured her she was the person for the job. Recently, some of Coleman’s former Sunday school children, now grown with kids of their own, called to tell her how big an impact she had on their lives.

“Hearing from them just made me feel good,” Coleman beamed.

Coleman’s other children, Lucille Griffin, Lee Arthur Coleman, and Geneva Davidson reside outside of Georgiana. One child passed away at birth. She also has a stepson that resides in New York.

For us to grow up, love each other, love others, share, go to church, go to Sunday school, that was a must in our house,” Lillie lovingly recalled.

The family is hoping to have a celebration soon. Due to Covid and family being out of town, they are having to postpone it for now. They still plan to make the day extra special for Coleman.