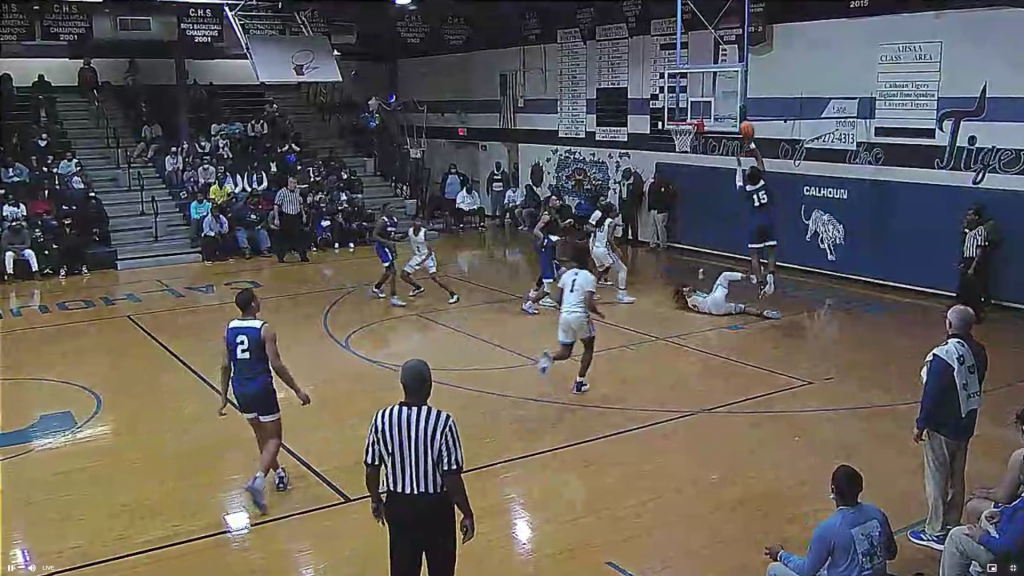 Highland Home School and Calhoun School battled it out in a sea of blue and white to see who would continue on the road to the state championship as area champions.

Calhoun managed to overtake Highland Home with a final score of 67-56 in Friday night’s game played at Calhoun High School.

Energy was high on the court as both teams came out shooting. Calhoun’s passing game was fierce. Highland Home chose to take full advantage of the “follow the ball” game using the fast pace to steal the ball back.

The Calhoun Tigers implemented a stall tactic as the second half began. Two players took turns just standing with the ball making no attempt to begin play as the clock ran down almost two minutes. Calhoun’s fans taunted Highland Home players by yelling “y’all are losers” during the minute forty-five ball stall.

Highland Home players were clearly at a loss as to what to do to start play as their dreams of the championship slipped away with each second on the clock.

“The kids played really hard. We missed some free throws and had some turnovers that helped Calhoun take it in the fourth. Calhoun was the 2A defending champions and I hope we get a chance to play them again. 2 years ago we were 4-seed and lost by 40 points against them. Look how far we have come. I am very proud of these boys,” Squadron’s Coach Jonny Mitchell said.

Highland Home will continue on the road to state on Tuesday 16. The Squadron may have lost the battle but the war for state is still undetermined.

Greenville Tigers No. 9 in final ASWA Class 5A…