Greenville Shuts Out CHHS in Region Play at the Vet 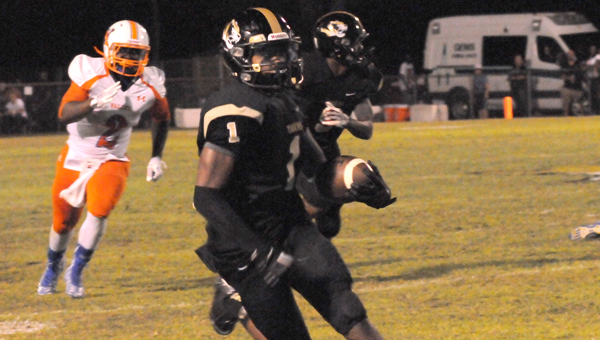 Under the glow of a near full moon and the bright lights of Veterans Memorial Stadium, the Greenville Tigers took the field last Thursday night in hopes to defeat in-region rival Charles Henderson for the third consecutive year, winning 21-0.

The Tigers won the coin toss, and With Quarterback Sam Sherling at the helm, The Tigers offense got off to a quick start in the first quarter.

“It was nice to see Sam make some throws. It was something we had been working on. We knew we would have to be able to do that due to how much we ran the ball the first game.” Coach Josh McLendon said

After stalling inside the five-yard line on their first drive, the Tigers offense returned to the field. Multiple face mask penalties by the Trojans put Sherling in perfect position to hit senior wide receiver Quentin Hamilton on a slant route for the first touchdown of the game.

On the first play of the ensuing Trojan drive, the prominent Greenville defense makes another play. linebacker Robert hall would force a fumble and defensive lineman Quincey Bolling would recover, giving the Tigers the ball on the Trojan side of midfield.

The Greenville offense wasted no time. Sterling hit a wide open Christopher Little on a deep ball down the middle on the first play. Giving him his second touchdown pass of the first quarter and a 15-0 lead.

The game would then slow down. Punts were traded, and opportunities were missed on both sides, but the Greenville defense never gave in.

Although happy with the performance, Coach McLendon knows points were left on the table in that first half

“We had a couple opportunities in the red zone and didn’t get any points out of them. We just have to finish drives and take advantage of all opportunities to score”

The second half was all Greenville defense. The Charles Henderson offense was just never able to get on track,

Only allowing 56 yards and 3 first downs all game.

“The defense is playing well right now. But we still have a long way to go. Creating those turnovers always helps,”  McLendon said.

No more points would be scored until late fourth quarter, when Jonathan Purifoy would intercept a pass and return It 93 yards to the house and seal the game for the Tigers.

“Anytime you can beat Charles Henderson is always good. We are 1-0 in the region, what we strive for. It was a good one but still have a lot to work on.”

Sherling would end the game 11-18, for 96 yards and two touchdowns.