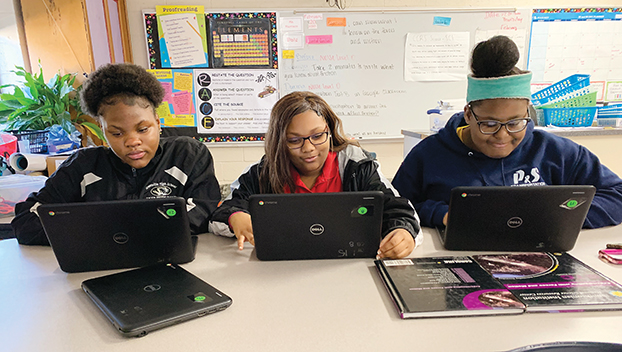 Greenville Middle School students, from left, Tykia Maxwell, Kayla Hamilton and Keyonna Porterfield work on some of the school’s new Chromebooks while in science class. | Photo by Caleb Wilson

Greenville Middle School has taken a step into the future over the last three years by ushering in a new form of education for its students.

A three-year plan was recently completed using Title 1 Funding to provide all students Chromebooks with updated lessons to help educate the students at a new level.

Title 1 funding is Federal Aid given to the schools to ensure that all children have a fair, equal, and significant opportunity to obtain a high-quality education and reach, at minimum, proficiency on challenging state academic achievement standards and state academic assessments. Doing this allows students who come from lower income have the same opportunity at an advanced education.

The increase in technology also aids the Butler County School System in its overall goal of increasing graduation rates by helping better prepare the young students for high school. The district’s graduation rate has increased more than 10 points in the last three years. Preliminary report card grades show an increase from 82.94 percent in the 2017-18 school year to 94.05 percent in 2018-19, the first time over 90 percent in a decade.

“I was blown away when I saw the numbers,” Superintendent Joe Eiland said. “I knew they were better because I sit in these data meetings that we have and see the results, but I had no idea that it would be that.”

Although graduation rates have been low in the past 10 years – its lowest being 66 percent in 2012-13 – Eiland said some of the issues were with the way data was extracted and reported, including transcript data, which was a major undertaking requiring corrective actions by the BCSS’s Director of Federal Programs Lisa Adair.

“Our graduation rates were better than they were reported,” Eiland said. “They were still incredibly low. The change came about for two reasons: reporting issues and Career Tech Director Rita McLain, along with Lisa, digging in and figuring out how you accurately report your data. Also, (Dr. John) Strycker – our leadership who was on fire and passionate about children – he empowered administrators and put together a great team. Then you have Donna Ash coming in as curriculum director — you put the right people on the bus — and you can’t do anything, but move forward. We have a group of administrators on board who are committed to excellence and moving this district forward.”

Greenville Middle was able to receive the funds due to the school’s statistics on reduced and free lunches given to students, according to school officials. A committee comes together each year to vote on what to spend the money on. The committee’s first choice was to provide every student a Chromebook for use during school hours. Of the four core classes — math, English, science and social studies — every student now has the ability to use a Chromebook. Future plans include providing teachers smartboards and other technological improvements in the classrooms.

GMS purchased 27 carts with each containing anywhere from 30 to 32 Chromebooks. In all, the school has more than 850 Chromebooks. The devices are also available in the library. According to Principal Bryant Marlow, each Chromebook purchased cost approximately $355 for a total investment of more than $300,000.

The school’s Library Media Specialist, Anna Salter, spoke highly of having the additional technology at the school.

“The Chromebooks get the children active,” she said. “They are participating in their learning; they’re not just sitting there listening to the teacher. They have apps that the kids use with the teachers, which make both more involved. The children love the technology. We’re also teaching the kids to use them the direct way with the teachers managing it I just think it was a good thing.”

Several educational software programs were also installed on each Chromebook for the students, including the Alabama Virtual Library, a source used for citations by colleges. Allowing students to navigate on this website at a young age will hopefully put them ahead when college classes require the same website. Kahoot, Stride Academy and classwork’s apps were also installed, which are all used for student-teacher online interaction.

Getting the students more engaged in a classroom will hopefully keep them more focused, allowing for more learning opportunities and involved lessons. Marlow hopes this proves true.

“We are preparing our students for jobs of the future,” he said  “One thing we know about technology is that it will be around always, and won’t ever be going away. So we want to make sure that it is embedded in our student classrooms, so they will know the ins and outs of Google Classroom, Windows, etc. There are more than 500,000 computing technology jobs available in the United States, which uses computer science. Out of that number, 5,100 are in Alabama, and there are only 516 graduates coming out of high schools in Alabama with that skill.”

“People don’t realize how critical the career tech piece is for our System in regards to making that graduation rate look so good and be so impressive,” he said. “Because with the completers — that’s someone who starts the
program in the ninth grade and completes it — that gives you some major points when it comes to graduation rates; when you actually follow through a pathway in career tech.”

McKenzie School’s graduation rate is expected to be the highest in the system at 100 percent. The Tigers are followed closely by Georgiana School with 97.14 percent, while Greenville High School’s rate is expected to be 92.13 percent. These graduation rates will not be official until the Accountability Report Card is released by the Alabama Department of Education in October 2020. Based on the rates, McKenzie is expected to graduate 23 of 23 students, Georgiana 34 of 35, and Greenville High School 117 of 127.

With graduation rates steadily increasing every year in Butler County, adding the Chromebooks will hopefully help continue that trend, increasing the number of successful college students.