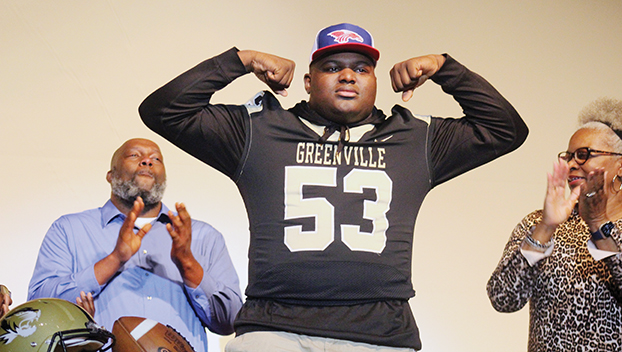 Haynes, a 6-foot-4, 300-pound offensive lineman for the 7-5 Tigers inked a National Junior College Athletic Association (NJCAA) Letter of Intent with Hutchinson Community College, a powerhouse, two-year football program located in Hutchinson, Kan. After he inked the offer surrounded by his family, the GHS coaching staff and teammates as well as his senior classmates in the school’s auditorium, his excitement for his new opportunity was evident.

“I have always wanted to play college football and this is a stepping stone for me,” he said with a smile. “I don’t know where the coaches want me to play, but I will play whatever they want me to.”

GHS head coach Josh McLendon said Haynes is deserving of playing time at the next level because of his actions on the gridiron while in Greenville as well as his leadership on and off the field.

“It’s not about what you say, it’s about what you do,” McLendon said. “Your actions are going to speak louder than your words. That’s the big thing, we want our players to go out and prove it with their actions. Talk is cheap – anyone can come up here and tell you what they want to do, but you’ve got to go out there and make it happen. Brandon has done that and he’s been successful, had a good season and I’m proud of him.”

Haynes has not decided what he will major in at college, but has narrowed it down to engineering or physical therapy. Nevertheless, whatever career path he chooses, his family, friends and coaching staff have full confidence he will succeed.